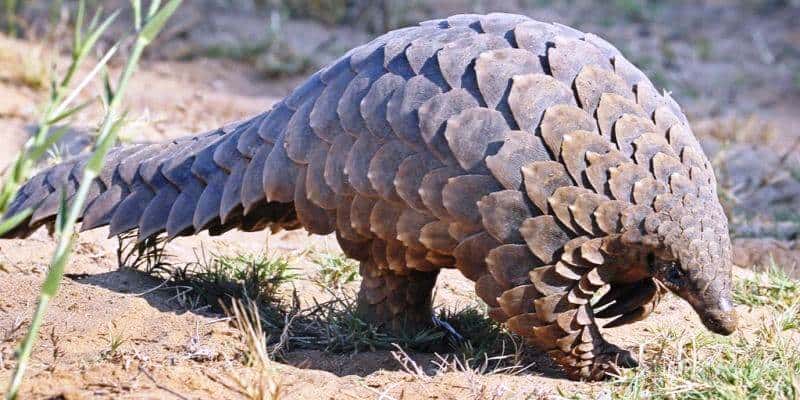 Pangolins or scaly anteaters are estimated to have lived on earth for nearly 80 million years. They were originally thought to be related to the similar-looking ant-eaters, sloths and armadillos. However, new studies suggest they are closer to the Carnivora, which consists of hyenas, bears and wolves.  The one extant family, Manidae, has three genera: Manis, which comprises four species living in Asia; Phataginus, which comprises two species living in Africa; and Smutsia, which comprises two species also living in Africa. The species found in Zimbabwe is the Cape or Ground Pangolin and its scientific name is Smutsia temminckii. In Shona they are called haka and in Ndebele inkakha. The name “pangolin” is derived from the Malay word pengguling, which means ‘rolling up’.  This is reference to the animal’s defense mechanism of rolling up into a ball when threatened.

Pangolins are about the size of a cat, 40 to 50 cms long and weighing about 12 kg.  They have sets of three long, curved, powerful claws on their forelimbs, which enable the pangolin to rip into ant and termite nests but are not efficient to walk on so they are bipedal, walking on their hind legs with their front limbs and tail held off the ground and used to counter-balance.

They often rise on their hind legs to sniff the air because they rely heavily on their good sense of smell (and acute hearing) which are used to hunt out termite and ant nests and to sense when predators are in the vicinity. Pangolins have poor vision (they never need to see further than the inside of an anthill..

A pangolin has a relatively small head but a long snout and a very long thin tongue that pulls back into a pouch deep inside its chest cavity (near its pelvis and last pair of ribs). The tongue extends to over 40 cm, which is longer than its own body. Pangolins are insectivorous (i.e. they eat insects) and their diet mainly consists of ants and termites (and a few other invertebrates) which they capture with precision when probing inside insect tunnels with their extremely long sticky tongues. A single pangolin can consume up to 20,000 ants a day. That is about 73 million ants a year!

One of a pangolin’s adaptations to their ant-eating lives is that they can close their ears and nostrils with strong muscles. This allows them to stick their faces deep into termite mounds without having to worry about insects crawling inside them. So they use their noses to find ants in the first place and then close their nostrils for eating.

Pangolins have no teeth and unable to chew. Instead, they have keratinous spines in their stomach and swallow stones (known as ‘gastroliths’)  that help them grind up their food in much the same manner as a bird’s gizzard and some reptiles, such as crocodiles.

They have long, strong tails that can be used as a weapon and they have more vertebrae (mostly in the tail) than any other animal. Females use their tails to carry their young and males use them for fighting (see below.)

Most of a pangolin’s head and tail are covered in horny, sharp and overlapping scales – the exceptions are the sides of the face, the inner parts of the legs, the throat and the belly. These scales account for up to 20% of a pangolin’s entire weight and are made of keratin, the same protein that forms human nails and hair and animals’ claws or birds’ talons. They lie on the body in a very different way to those of a reptile and give a pine cone appearance.  At birth the scales are soft and harden as the pangolin matures. Like hair, the scales carry on growing throughout the animal’s life though they are ground down when it digs and burrows in search of food.

A pangolin curls up to defend itself and protect its face and soft furry belly, creating an impenetrable, spiky, ball that can defeat even the jaws of lions and leopards though other powerful animals like hyenas can sometimes break through.   Sadly, this does not protect them from humans, who can merely pick them up.

Pangolins have another defense mechanism.  Glands near the pangolin’s anus secrete a noxious-smelling fluid that is used for both marking territory and defense.

Pangolins are nocturnal, solitary animals. They live underground and can excavate themselves very deep burrows. (They have even been known to take over the burrows of aardvarks and aardwolves.) The ground pangolin is one of the least-studied pangolin species. Not only is it a shy, secretive creature to begin with but it is also difficult to find in the wild since it is only out at night and its dwelling can be either completely concealed or disguised as another animal’s.

Unlike most species, the females go to the males. The males will leave chemical trails with their urine or faeces that signify their readiness to mate and the female will find them if they are interested. Pangolins also have male-versus-male competitions beating each other, using their tails as clubs. The female will only mate with the winner.

The gestation period of a pangolin is 139 days (about 4 ½ months). Females usually give birth to only one offspring. The young are about 15 cm long and weigh about 340 grams at birth. When born, a baby has soft, pale scales, which begin to harden by the second day. Pangolin babies often ride on their mother’s tail. When danger is near, the mother will ball herself up around her baby to shield it. The baby will drink its mother’s milk until it is three to four months old and starts eating insects at one month. They remain in their mother’s care for five months.

The pangolin lifespan is unknown because captivity is traumatic for them due to their highly specialized diet and extreme sensitivity to capture-induced stress, resulting in depression and early death. As a result 70% of pangolins do not live for more than a year in captivity. Breeding pangolins in captivity has therefore proven to be difficult. (Have a look at the video below for one of the successful attempts to “domesticate” a pangolin.) The oldest recorded pangolin in captivity died at 19 years old.

In a later blog I will talk about why this shy, harmless creature is an endangered species and the most trafficked animal on the planet.