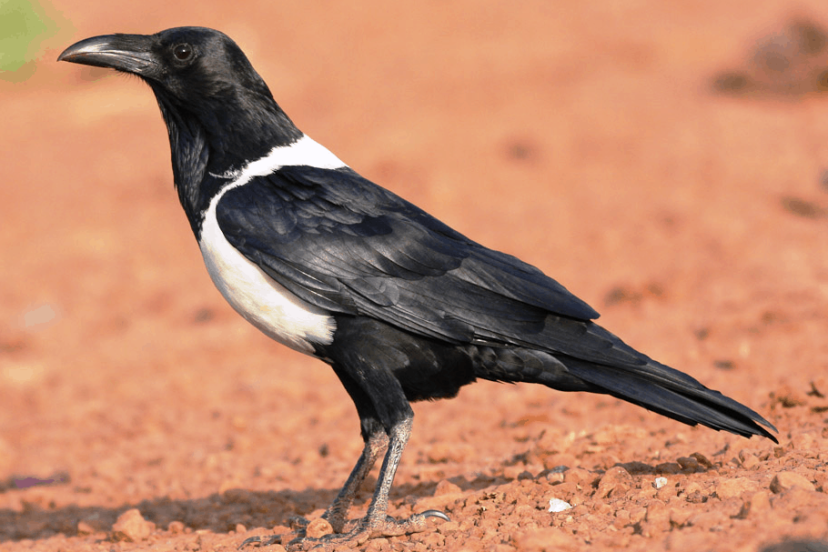 This is certainly the most commonly seen and noticed bird in suburban gardens and rubbish pits.  It’s as big and noisy as it is obvious, and it cannot be said to be shy, though like most birds it is cautious.  Well, better words would be ‘cunning’ and ‘opportunistic’: a clever thief (to see just how clever, don’t miss the amazing video cited in the last paragraph below).

It is large: nearly 50 cm in length; and heavy, about 550 g.  Crows are monogamous, which means that they pair for life, and they are often seen in pairs.  In Harare suburbs, however, they seem to move around in large noisy gangs, shouting loudly to each other.  They are very vocal and their call is distinctive – a “loud harsh kraah!” and a “snoring khrrr” as it says in my book, which puts it well enough. Actually, though, they have a quite large vocabulary and can mimic sounds and even be taught to ‘speak’.  There is another quieter and more agreeable noise that took me a long time before I realised it was coming from these birds: three soft clicks – a rather understated and pleasing sound which strikes one as untypically discreet for these birds, judging by their usual brash commotion.

This YouTube video shows a tame Pied Crow making some very strange sounds:  https://www.youtube.com/watch?v=BLY16dSk2kM .  They make quite good pets, I believe, though messy.

Crows are often regarded negatively: they are seen as “birds of ill omen”, probably because of their association with carrion (dead bodies) on which they will feed.  They do have some unattractive habits, like raiding rubbish bins and scattering litter everywhere in their search for food.  Around here, I expect they survive largely on garbage, and they are common sights at refuse dumps.  I once lived where they were regular visitors to the bird bath, and they would often drop into the water what they were carrying, either in order to drink or perhaps to soak it – and then leave it and fly off.  I often found lumps of dried sadza in the water and, more than once, chicken heads and entrails picked off a garbage dump.  If you have ever wondered, as I have, why there are often large beef bones on top of our roofs, here is your answer: a crow grabs a juicy bone from the bin and makes off to a safe point on a roof where it can pick it clean and leaves it there when he is finished or disturbed.

Like starlings and some other birds, they like shiny metal things, and can take them off to their nests (though to what purpose, I do not know).  One story in my family has a crow stealing a set of car keys left lying on an outside table, and flying off with them.  They are said to rob other birds’ nests and feast off the chicks.  With such an indiscriminate diet, crows must have an impressive digestive system, able to extract nutrients from such a wide range of substances.  What they can’t digest or is too large to pass through their system, they regurgitate from the stomach and expel through their beaks as “pellets”, like many other species of birds, most notably birds of prey such as owls.

Crows are highly intelligent: one trainer said “as intelligent as a 7-year old child”.  If you doubt this, have a look at this absolutely extraordinary video of a raven (a cousin of the crow) solving an 8-stage physical puzzle: https://www.youtube.com/watch?v=WYBATyILJD8 .

They can also be useful: a few years ago, a new lawn-grass planted where I work became infested with so-called “Army Worms”, a kind of voracious small green caterpillar that can devastate an entire lawn in days.  A large squadron of crows descended and, within a few hours, completely demolished them, prying the things out of the roots with their powerful beaks.  The lawn survived and it is still there.  We owe them for that, at least.