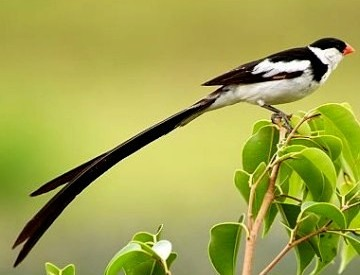 (Interestingly, the name ‘whydah’ is derived from a small town named ‘Ouidah’ on the coast of the ancient kingdom of ‘Whydah’ [also spelt ‘Hueda’, ‘Whidah’, ‘Ajuda’, ‘Ouidah’, ‘Whidaw’, ‘Juida’, and ‘Juda’] in Dahomey in present-day Benin in West Africa.)

Video with song: https://www.youtube.com/watch?v=scvdAbxgokE (This clip is rather long, but it is worth it because the full variety of the calls this bird makes can be heard.  The first minute or so are just single cheeps but later there are genuine songs.  Have patience and persevere… especially if you want to know why or at least how the caged bird sings, for they are commonly bred, bought and sold as caged birds.)

Usually I see this bird often in the suburbs of Harare, but not this year or last year.  I am hoping that this is mainly because, when they are out of their distinctive breeding plumage they are pretty much invisible, rather than because they have moved away altogether.  Out of breeding time, the males are as drab and unspectacular as the females and so hard to spot and identify – unless one is paying more attention than I am normally able to do.

As a species, they are sedentary, meaning non-migrating, though also ‘nomadic’ in the non-breeding season.  As every parent knows, having a nest and chicks and so on really does tie you down.  Well, having said that, it must be admitted that these whydahs are well-known as cheaters in that regard, being ‘brood parasites’ which lay their eggs in the nests of other birds so that they remain themselves free from the trouble of hatching, feeding and bringing up their young.  They usually choose waxbills as their victim-hosts for this shameful piece of trickery.

And another thing: these Pin-tailed Whydah males are terrible macho show-offs.  They have a very fancy song-and-dance routine that they do (it is known as ‘displaying’) in front of any likely female.  The female sits on a prominent branch and the male ‘dances’ in the air in front of her, waving that magnificent tail in front of her up and down.  If she is sufficiently impressed, which is not on every occasion, she will herself fly up and mating takes place in mid-air and in an instant and the job is done: it looks for all the world as if he has bumped into her rather hard.  They both fly off – he (no doubt very pleased with himself and mentally “carving one more notch on the butt of his gold-handled cane”, as the song says) in search of another female to impress and impregnate, and she (no doubt more thoughtfully) in search of an unsuspecting waxbill in whose nest to lay her egg.  (Of course, it is not really true that she is instantly ready to lay, for it takes some time for the egg to form within her.)  These birds are ‘polygynous’, meaning that the males mate with many females: he has as many ‘wives’ as he can, distributing his genes as hard as he can and with admirable largesse.  Since they have successfully ‘out-sourced’ the whole business of raising babies, they do not have to bear the responsibility for and consequences of their promiscuity, and can afford to make as many babies as possible – unless or rather until he finds himself exhausted with all that effort, I suppose.

One last interesting fact: some brood parasites learn the songs of their hosts.  All parasite chicks will need to appeal for food to their foster parents in the same way as the hosts’ chicks.  Those ‘give-me, give-me, me-me-me’ noises are pretty standard, I imagine, but some go on to learn the more sophisticated songs of their hosts and include them in their singing later on in life when they have long left the host-nest.  No doubt this is useful in the business of tricking potential hosts into raising chicks not their own: you just have to sit in a tree and shout “yoo-hoo!” and the poor dumb hosts will shout back unknowingly, “Here we are!  over here!”  These whydahs, however, do not mimic the calls of their hosts.  Why not?  Don’t know.  But, as you can hear from the video cited above, they are able to sing their own songs – and quite sweet they are too – even though they have not been brought up by their own species.