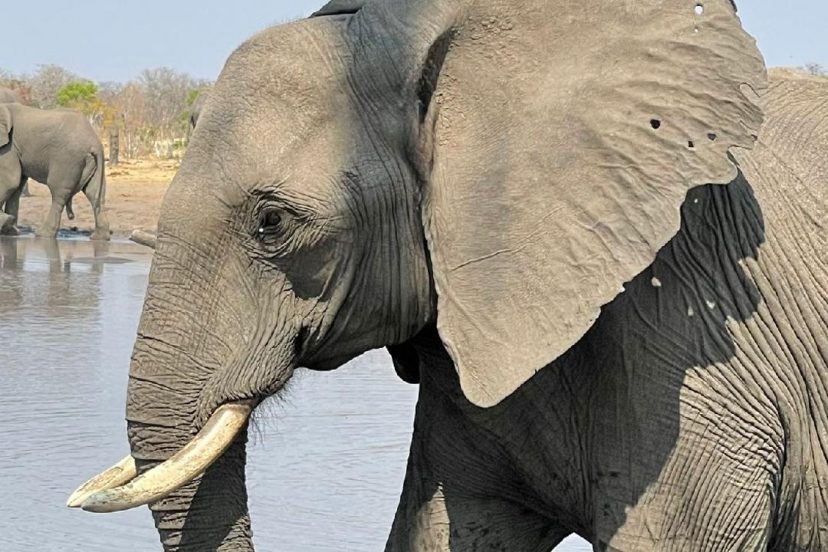 (With Richard’s permission I provide here a simple summary of the complex points he was making, so that we can all be thinking about and discussing this controversial subject -Paddy)

Objectives of this talk:

To touch on some of the nodes of polarisation;

To give examples of the need for root cause analysis;

The causes for polarisation on the topic of Zimbabwe’s elephant population (as well as elephants throughout Africa and globally) are many, complex, multifaceted, interlinked and fully loaded with human High Horse dynamics.

The High Horse syndrome is a human invention that involves clinging to a vigorously held opinion that one’s own belief on a topic is superior to all others. We all, individuals, organisations and countries, have High Horses (I have a whole stable of them) and the mounting of High Horses is a cause of most of the polarisation, contention and negativity that mar human relations.

Step one in avoiding this negativity is to become conscious of when we are clambering onto one of our favourite High Horses and causing others to mount their opposing High Horses. If we are going to find our way through contentious issues to useful outcomes for all concerned we are going to have to dismount and listen very carefully to the arguments and viewpoints of our rival riders.

We need to take the time and effort required to understand their world view on the topic in hand, without necessarily agreeing with them.

Most of the time all contestants would benefit from undertaking a “root-cause-analysis” of the issue at hand.

Elephant conservation addresses the interests of each discrete population.

Animal welfare rights tends to address the needs of the individual or family unit.

Often conservation and individual animal welfare can operate together – but at times they are in conflict and become a source of bitter contention, for example in certain cases feeding of elephants in drought conditions or in larger matters of elephant population management.

The animal welfare perspective is horrified by the death of even one of these iconic animals when human effort could overcome nature and prevent this death.

The conservation perspective looks at the all the circumstances and factors governing a total population and advocates policies maintaining sustainable elephant populations over periods of decades.

National Parks narrative is that money from the sale of baby elephants to China is needed for conservation. The numbers involved are not of population relevance either way. But the handling of the exportation is a massive and legitimate animal welfare issue. It is likely that this act results in some donors and tourists abandoning Zimbabwe.

It has been “Come and shoot one of 500 elephants” (because we need the money). (Funding to support the custodianship of elephant is indeed scarce.)

This tone of messaging and marketing is likely to have done damage to Zimbabwe’s reputation, credibility and hence funding support.

THERE IS NOT ONE ELEPHANT POPULATION

There is not a generic problem concerning elephant populations in Africa – individual country populations need to be looked at in context. Within each country there are sub-populations with contextualised dynamics and the need for relevant interventions.

Claims of a generic solution across Africa rather than contextualising lead us into serious error and also stifle debate. The trumpet call that “elephant are facing extinction due to poaching” maybe a great by-line for funding but is no longer valid and there are other facets that need attention and funding.

Kenya’s elephant population was decimated decades ago and is now stable. Kenya is a strident voice for elephants being on CITES Appendix 1.

Kenya has a large, well-funded, well-branded and strong conservative community. They hold the megaphone for elephant population policies and have the ear of the globe on these issues.

We in Zimbabwe, on the other hand, have a far larger elephant population but have a small, minimally funded conservation community and which is not unified around our message which is also a far more complicated narrative than Kenya.

Kenya Wildlife Serves is an arm of government.  Zimbabwe Parks is constituted as an “Authority” and must secure its income from tourism and hunting. (ZimParks does not receive support for the State – the conservation world should realise that this is not a sustainable funding model on its own.)

We should be preparing our ground 5 to 10 years in advance as a responsible, transparent, effective and efficient and trusted custodian of elephant and then stridently lobby for dispensation from the rigours of CITES as a regional block.

Some countries, like Kenya, choose to burn their ivory, an important public relations performance.

Zimbabwe needs funds to put towards conservation as tourist and hunting do not cover the bills (and there should be not an expectation that they could or should without help and innovative funding).

I contend that there are elegant solutions. Ivory from the stockpile can be drip-fed over say 20 years, into a monetised process in a manner that would not support the illegal trade. This solution is complex and would require a thesis of its own.

THERE IS NOT ONE ELEPHANT POPULATION IN ZIMBABWE

The four elephant sub-populations have their own regional management plans chaired by National Parks and each area has its own challenges and possible solutions. The figures shown are averages with wide confidence levels. The strong and erroneous message coming out of Zimbabwe is that we have too many elephants whereas it could be argued that in Hwange and Gonarezhou, for example, we have too many, along the Lower Zambezi the numbers are of the right order whilst in the Sebungwe the numbers are low.

One of the problems is the arguments about the actual figures for elephant populations.

Surveys do not provide the basis for an exact science. Despite best efforts they contain unavoidable variables: observers, vegetation cover, previous rains. Confidence levels for each area can vary from 20 to 40%. They require open and clear minded interpretation. These results are often a primary cause of polarisation. We interpret to suit our agenda.

The Zambezi Valley “slide rule/ overlap of 2014 and 2021 population estimates illustrates the wide range of confidence of a survey.

Interpretation of carcass statistics needs equal care. The Africa-wide rule of thumb for assessing carcasses can be very misleading. There are many localised factors affecting how carcasses age.

THE DEMISE OF CAMPFIRE

Loss of range and effectiveness is partly due to a collapse of the CAMPFIRE system. Some drivers of this collapse could be habitat loss, competing costs centres and the ever-present corruption but also the loss of income from the neighbouring commercial farms levies which used to go towards Rural Councils for roads and salaries.

Poaching is down across most of East and Southern Africa. One generic reason given is that the demand price in the East has fallen. The street price for a tusk in Zimbabwe has dropped in recent times to between US$50 to $80 and in Uganda $70 to $100. Data on in-country poaching is scant but seems to support that poaching is down.

Anti-poaching operations across the country remain prepared for an upward kick in price. The downside is that anti-poaching funding is falling away due to the falling sense of there being a crises. Generic messages like “the elephant being pushed to extinction” are mischievous and divert from the complexity of the situation.

Hunting can be a contributor to conservation via protection, scientifically based quotas and, to a degree US dollars paid to Parks in revenue.

But hunting is a mixed bag in Zimbabwe. The hunting is governed by an excellent system of laws and regulations, which the country can be proud of.

However, there is a grim history of unprincipled hunting in some areas of the country causing biodiversity distress. Hunting needs to strengthen its enforcement practices.

The industry needs rebuild its brand at a national and global level by adhering to best practice and by building awareness within the non-hunting communities of its conservation role beyond the industry.

It is pleasing to see the Association making a concerted effort to try and unify a fractured industry and to then build the confidence of the conservation minded.

Animal Welfare crusaders need to be supplied with a great deal of factual information . Any cause, or belief system, is not well served by unquestioning evangelism.

ELEPHANT POPULATIONS ARE NOT THE ONLY FACTORS AT PLAY

I will use the Zambezi Valley as a “case study”.

Zimbabwe is experiencing massive deforestation – clearing great swathes of indigenous bush for tobacco growing, domestic use of wood for cooking and warmth, wood for sale in the absence of other forms of livelihood.

The small-scale grower’s curing wood (with one notable rectification initiative by MyTrees Trust) is not paid for by multi-national tobacco outfits. The value of this loss is not just the killing of 100-year-old trees but the entire local biosphere is destroyed. The pioneering  initiative being undertaken by the MyTrees Trust to plant indigenous trees in a bid to reclaim the biodiversity and give the villagers a sustainable fuel source is commendable.

Downstream siltation is smothering year-round water for elephant in parts of the river system in the “flat-lands” and the resultant wide, shallow sandy riverbeds become sources of flooding when run-off is heavy, as in these damaged bridges on the road into Mana last year.

We must avoid the temptation to blame the usual scapegoat “climate change”. These bridges have lost not been to undue flooding (as is the thinking) but due to heavy disposition of sand on the entire river system.

Root cause analysis would show that loss of natural water supply for elephants has been caused by upstream deforestation.

One resulting conservation issue is that more elephant are going to the Zambezi River causing accelerated habitat damage . (This loss of inland water is also impacting buffaloes.) Boreholes/pans at in-land tourist camps may, to some extent, mitigate this water loss.

Let’s talk and listen to each other

Let’s support National Parks in any way we can. They are the custodians of the elephant. We need to be authentic partners.