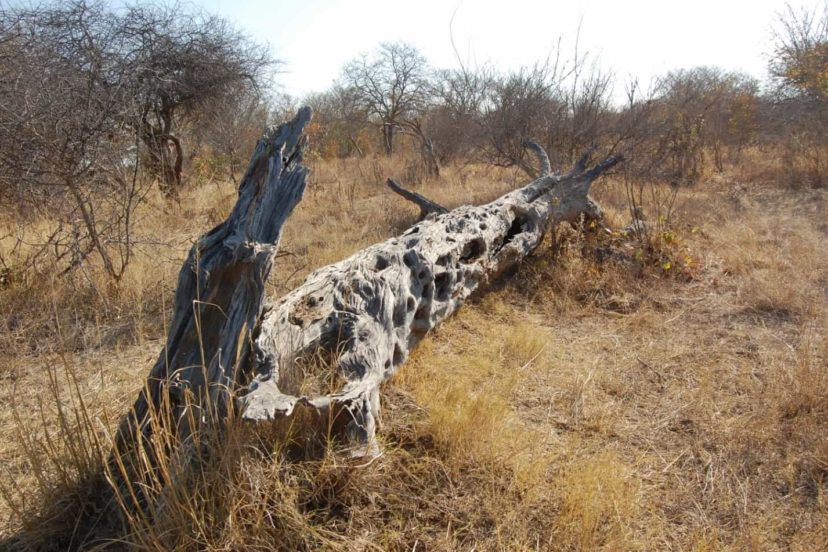 This article turns from outlining the environmental significance of deadwood to exploring ideas for its preservation. We continue to quote from the WWF Brochure on deadwood entitled Deadwood – Living Forests.

Protected areas should be dedicated primarily to biodiversity conservation. Allowing natural dynamics guarantees greater diversity of habitats and species. Deadwood is still often lacking in protected areas thus considerably undermining their overall value. An integrated protect-manage-restore policy for forests is promoted by WWF. All three of these approaches have a role to play in protecting species associated with deadwood. Protection – increasing both the number of protected areas and protecting individual trees and microhabitats – lies at the heart of efforts to protect saproxylic species.

An integrated strategy in protected areas should include:

■ Educating users: a lack of understanding about the importance of dead timber means that much is removed, even from “protected” forests, by people who do not realise that they are causing damage. An effective educational campaign, explaining the role of deadwood through nature trails, leaflets and exhibitions, can help protect the habitat within protected areas and also encourage people to manage their own land in a more ecological manner.

– Informing within protected areas: trails, sign boards etc (e.g. as is currently the case in Poland and Slovenia).

– Courses and training: the inclusion of deadwood management in short courses and in standard forestry training will help to cement understanding of its importance.

– Informing managers and public: for instance both the French and British state forest bodies have published guides to managing deadwood.

■ Providing effective guidance within protected areas (related to the above point): many forest reserves have been managed in ways that are bad for saproxylic species. There is a general need to stop logging within IUCN Category I-IV protected areas. Guidance is needed for protected area managers on the importance of deadwood and on habitat requirements. Some common management actions, such as coppicing, while valuable for a proportion of species may be harmful to saproxylic species if carried out in the wrong way.( Most guidance in Europe is still at a very general level compared with North America. In British Columbia a government manual gives habitat requirements for over 130 vertebrate species using a typology of deadwood and details of decay, sap conditions etc.)

■ Quantifying the extent of the challenge: deadwood species have often been ignored and including them in national Red Lists of endangered species and on international agreements like the Bern Convention is important, both to quantify and publicise their conservation problems. Recent attempts to increase data quality, for instance through inventories of threatened fungi in Macedonia and Greece, need to be extended.

■ Identifying and protecting key sites: the richness of remaining natural forest fragments is increasingly recognised, yet many are currently threatened or degraded. Use of the Natura 2000 network and additions to national protected area networks can help to maintain essential reference forests and “arks” for deadwood species. Currently Western European countries still have few strict forest reserves and forest harvesting is often allowed even in Category II national parks, which is bad for deadwood. Further east, many valuable old forests have been protected in the past, but the pressure for logging (both legal or illegal) of these areas is now very high.

■ Legislative needs: in many European countries forest laws and environmental legislation need to be reformulated to distinguish between forest management in protected areas and commercially used sites. Sanitary felling based on legal requirements should not apply to protected forest areas IUCN I-IV.

■ Enforcing controls: illegal timber extraction remains a serious problem in many protected areas and where education and information are insufficient, disincentives are also needed.

■ Using surrogates: in protected areas with a serious lack of dead timber, active restoration may be needed. As an interim measure surrogate habitats may help to preserve a few keystone species: the most common examples include nest boxes and bat boxes, but this is costly and only partially successful. The recovery of the pied flycatcher (Ficedula hypoleuca) in parts of the UK has been ascribed to use of nest boxes. Such surrogates only support a tiny fraction of the biodiversity associated with deadwood and are therefore not a viable long-term solution.

How to manage dead wood

Responsible forest management requires sufficient amounts of deadwood. The compensation for leaving veteran trees and not removing valuable deadwood in commercial forests is increased forest stability and resilience. Deadwood management does not threaten tree health and does not cost a lot if done wisely.

Protected areas will only ever cover a small fraction of European forests and much of the managed forest estate can and should play a role in biodiversity conservation. This can often include retention and management of deadwood within production forestry. Actions depend on forest types and situations, but some general principles are emerging:

■ Including veteran trees and deadwood in management plans: plans can identify likely interventions that can support saproxylic species – as described below – and where to apply them. (Retaining deadwood in exotic plantations may have few benefits if species are not adapted to these habitats.)

> Existing large, veteran, dying or dead trees, pollarding senescent trees if necessary to prolong the existence of this particular habitat

> A proportion of middle-aged trees to ensure the future

■ Using other management interventions: either in designated areas or more generally including:

> After a storm, while granting salvage logging, balancing the ecological and economic benefit of leaving deadwood on the ground (without perverse subsidies the economy will often support a near-to-nature form of management). > Creation of artificial snags (the official forester’s name for stumps) by leaving a proportion of some trunks standing after felling. Such techniques work. Research by Anders Lindhe of WWF Sweden found that hundreds of beetle species, including many red-list species, utilise high stumps left after cutting, making high stumps in logging areas and other open sites valuable tools for conservation of saproxylic beetles.

Studies have shown that around half the artificial deadwood snags created are likely to be used by cavity nesting birds. The amount of dead timber retained within managed forests is open to debate and management decisions will require detailed knowledge of local conditions. A general rule will probably be the more the better, although the quantity will be a trade off against the value of timber and the practical inconvenience of large amounts of deadwood in production forests. For European boreal and temperate forests, between 20- 30 m3 /ha of deadwood or 3 to 8 per cent of total volume of wood could be suggested as a reasonable amount, divided between standing dead trees and down logs.

In Municipal Parks and Private Gardens

In some areas veteran trees often exist outside forests, in parks, hunting reserves and even public or private gardens; such trees can provide important refuges for threatened species. Conserving and where necessary enhancing existing veteran or dead trees helps life return to our doorstep. It would help if the public was educated on the importance of deadwood in as many ways as possible.

In today’s damaged forest ecosystems, strategies for restoring deadwood are also urgently required… But as deadwood is an indicator of naturalness, restoration needs to be carefully planned and rely wherever possible on natural functioning.

Studies in the Wye Valley in the UK found that deadwood volumes in mature stands that had not been managed for a century reached the level and variety of ancient forests in mainland Europe and eastern North America.

While natural retention of deadwood could be the rule for deadwood management, particularly in managed forest, in specific locations when threats to critically endangered species are well documented or where recovery is very slow, conservationists and foresters may wish to speed up the process of recovery. In a crisis, where deadwood is in such short supply that dependent species face extinction, short term restoration methods may be justifiable, whereby deadwood is created through artificial disturbance.

Several restoration strategies have been tested in Europe, for instance in a Life project in the Bosca della Fontana (Pô plain, Italy). They can include the deliberate creation of standing or fallen snags; uprooted trees; leaning dead trees; standing dead trees; hastening senescence; and creating habitat trees: drilling, for example, nest holes of different sizes so that species using secondary nest holes have instantly created habitat.

In southern Finland, 10,500 hectares of forests are being restored through the artificial creation of dead and decaying trees as part of a more general restoration programme which also includes prescribed burning and peat-land restoration. In general artificial methods are expensive and only likely to create limited benefits, and passive restoration will create better habitats although the process will take longer.

More important is the development of a comprehensive spatial approach to ensure connectivity of deadwood habitats (as habitat fragmentation is currently the major problem facing saproxylic beetles).

Encouraging the philosophy of non-intervention, which is still against the instincts of many foresters, is also very important. Expert knowledge of the ecological needs of particular species is required to create the right kinds of habitat – for instance in Sweden efforts at protecting the white-backed woodpecker include focusing principally on retention and increase of broadleaved tree species.

The limited research suggests that recreated habitat can certainly be useful but it is probably not providing the complete habitat range expected; for instance data indicate that trees killed by bark beetles provide richer snag, from a biodiversity perspective, than one created by ring-barking. Artificial methods can however certainly provide an emergency bridge while longer-term management changes can have an impact.

We have been talking about the importance of allowing dead wood to lie on the ground where it has fallen naturally.  Many of the same arguments apply to dead leaves.