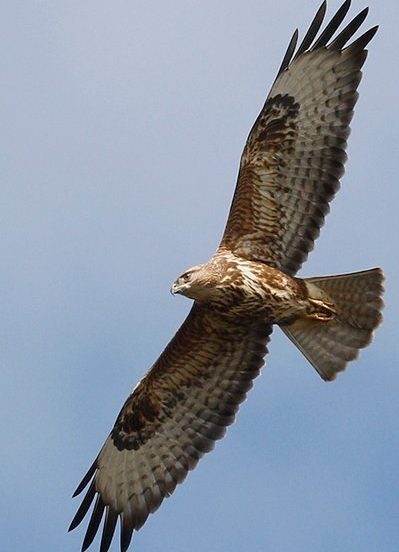 This episode gives examples of three raptors that have the standard English name of “Buzzard”.  The bad news, however, is that that term is used rather loosely and it is not the case that all birds called buzzards are actually related genetically.

A group of similarly shaped birds of prey carry the Latin name of Buteo: these are described as “thick-set [i.e. rather bulky in shape, not thin], medium sized hawks with broad wings and rounded tails”.  They all have the lower part of their legs called the tarsus (tarsi in plural) bare and uncovered by feathers, unlike the eagles whose legs are generally feathered down to the feet (SASOL, Birds of Southern Africa 5th ed).  (Look at the pictures of the eagles from the last episode.)

The first two we will look at are both classified as Buteo but the third, which is undoubtedly the most common of these, the Lizard Buzzard, is not a true buzzard even in this sense: its Latin name is Kaupifalco not Buteo.  (To make matters worse, in the United States, the term buzzard is often used to refer to vultures.)

We start with the hardest of them and work towards the easiest: here, the duplication of the scientific Latin names is a warning of complications to come.  First of all, there is dispute as to whether there is one species here, in two variations, or a species (Buteo buteo) and a sub-species (Buteo vulpinus).  ROBERTS Birds of Southern Africa (VII ed) treats them in the same article.  For there is a lot of variation in colours and patterns between individual birds.

Unfortunately, it is too easy to assume – as we mostly do – that all birds of the same species have exactly the same colours and patterns of colours.  Most, I suppose, do, and this is good news for the bird watcher.  But some species, such as this one, demonstrate a lot of variations between individuals of the same species, much as we individual humans vary in shape and colour.  (Birds probably have as much trouble distinguishing between individual humans!)

Some of these buzzards are overall a pale brown, others greyish brown, and still others rufuos (reddish) or even almost black; they can be easily confused, therefore, with birds of other species altogether.  Identifying these birds definitively is not easy, even for experienced watchers: among themselves, however, I am sure they have no such difficulty.

Nature is more interesting than we think, sometimes.  (No, always.)  These are migrants: they are here only for our summer months.  They spend half their lives far away in Eastern Europe and Siberia in the northern hemisphere summer where they breed and raise their young.  When winter comes and food gets scarce, they set off from there in September and October to enjoy the southern hemisphere summer here, spread out in a wide arc from the Zambezi down to the Cape.

Their route here takes them southwards on either side of the Black Sea (either over Bulgaria down the western side or over Russia, Turkey and Syria down the eastern side), funnelling together to enter Africa over the Suez Canal, some stopping in Zimbabwe, others making it all the way to the Western Cape Province of South Africa by late October, and many points in between.  Here they find plentiful feeding grounds, eating insects, rodents and reptiles which are abundant in our summer heat.

In late February they make the long journey back again, in large groups of up to 100 birds, to breed again.  These birds are not easy to identify; but when you see one, and whether you know it or not, you have seen a major globe-trotting visitor.

This is a handsome, mainly white, buzzard with a couple of useful identifying features: the white breast, for instance, and also the brown chestnut colour of the tail (which does not come out well in either of these pictures but is easily seen in the field) and – best of all in my opinion – the parentheses-shaped black marks like brackets, ( and ), near the ends of its wings.

Seen from underneath, these are unmistakable.  They are not migrants but a locally common resident in mountainous and hilly, rocky territory, and rather fiercely territorial, chasing away other raptors and competitors for their food sources.

Zimbabwe is one of the two places in southern Africa were they are common, the other being Namibia.  I have seen them in the hilly country of Chinamora, just north of Harare.  They hunt from perches or from the air, swooping down to snatch reptiles, mainly snakes (including puff-adders), lizards (including Water Monitors and chameleons), mammals (including Rock Hyrax) and birds.

So this is the buzzard which is not a buzzard.  The Lizard Buzzard is a locally common resident, not a migrant like the Common or Steppe Buzzard.  It is not really of the buzzard shape but smaller than the other buzzards above and does not have the same stocky or bulky build.  It is also quite common, at least around where I live.

Notice the blackish eyes: in the second picture of the bird in flight, you can make out the pupil of the eye.  But in my experience, the whole eye appears black as in the first picture of it perched.  And there’s the monogrammicus, the single dark line vertically under the chin in the centre of a white patch; and the red feet and sere around the beak.  If you get a good sight of it perching and facing towards you, you can see all these things clearly.

Often, though, you catch sight of birds only as they are flying away from you.  That is why the picture showing it in flight is helpful: often you will see its tail as it flies away: notice the white rump just above the tail and the white band across the tail further down, with white tips to the tail feathers further down.

If you have only a quick sight of the bird flying away from you, you might wonder whether you have seen a Lizard Buzzard or the similarly sized and coloured Gabar Goshawk (which does not have monogrammaticus) – at least I have done so – until you consider the number of bands across the tail.  See the Goshawk, which we might cover in this series, in the picture below.