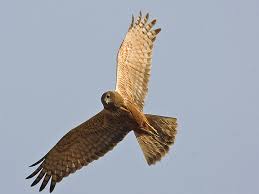 Harriers are large rather slender raptors (the body about 50cm long with a wingspan of over a metre) with long and rather narrow wings and tails.  In flight, the head looks rather small for a bird of that size.  You  might see a harrier flying within a few metres above the ground, using a loose, flappy style alternating with periods of gliding, holding the wings tilted slightly up.  They are said to have a rather systematic hunting method, flying slowly back and forth over the hunting ground looking for prey, suddenly twisting and diving onto rodents, or small birds, frogs or lizards.

I am presenting three examples here: the African Marsh Harrier, the Black Harrier and the African Harrier-Hawk, also known as the Gymnogene.  The African Harrier-hawk is, strictly speaking, listed separately from the harriers and is not really a harrier but it has some looks in common. In other words it does not fit easily into any one category (a bit like a hawk, a bit like a harrier) but it is simply too wonderful to leave out of this series, and so I am covering it here as well.  It is also the one of the harrier type that is most common and easily seen.

This good-looking bird is a resident in this part of Africa and sedentary, which is to say that it does not move much out of its territory.  Its usual habitat and hunting ground is said to be large permanent wetlands and the surrounding areas.  It is, I am afraid, another ‘brown raptor’, of which there seem to be many – at least when viewed from a distance.  The photographs above show quite a lot of variation in colour and tones of brown, which is why I called it ‘good-looking’, though the rodents and small birds that are its prey will hardly agree.  But unfortunately, these niceties do not often show themselves in the field, especially if they are moving fast.  Add to that, quite a lot of actual variation takes place as well: the book calls them “variably streaked”.  But notice the striking yellow eye, yellow legs and upright posture; also the mannerisms of flight.  The typically marshy wetland environment could be a clue as well.  These birds fly slowly over their hunting grounds, not far off the ground, using their wings but also gliding, as they look for prey.  The right hand picture shows the characteristic V-shape in which the gliding wings are held.  These pictures do not show it, but the long tail ends squarely and is covered with 6 or so dark bands horizontally across, rather similar in design if not in colour to the Black Harrier described below.  I cannot claim to have knowingly seen this bird, so I am relying on the pictures.  If you are able to Google “African Marsh Harrier” you will be able to look at a lot of further photos of this bird.

This fine bird is almost entirely black, but with bright yellow eyes, yellow cere (the fleshy cover at the base of its beak), legs and feet.  Again, I have not ever seen one myself; and that’s for two very good reasons.  In the first place, they are to be found in the southern regions of South Africa where they are “uncommon residents”, and are not seen as far north as Zimbabwe.  I thought to include them because, well, they are such beautiful birds and, who knows, you might get a chance to see them down there someday.  In the second place, they are listed not only as “uncommon” but also as ENDANGERED: a good sighting would be a privilege indeed.  If you do catch sight of one, there shouldn’t be much difficulty in identifying it.  The overall black colour and the white bars on the longish tail seem to be very visible both when seeing it from above and below, and when it is perched as well as when it is in flight.  You are more likely to see it doing the typical harrier thing of flap-gliding over low vegetation looking out for prey.

This fascinating bird is not, as I said above in the introduction, really a harrier, although it has some harrier-like characteristics.  Notice first the differences.  Compare the photos of the Black Harrier and this Harrier-Hawk: it has long legs and a relatively small head; it has a similar flying style – slow flapping and gliding.  But the shapes of the wings seen from underneath are very different, and the tail is much broader. The face around the eyes and beak are bare of feathers and brightly coloured yellow; the eyes are black with no easily seen iris in the centre.  This bird is considerably bigger than the other two harriers, up to 66cm, and seems much more loosely built: its wings and plumage flop around, as if it is wearing a suit of clothes that are too big.  Unlike the harriers, it often hunts on the ground, or among rocks, or hanging below the branches of a tree to pull out nestlings from the nests of smaller birds.  Its legs are ‘double-jointed’, allowing it to bend them both directions when it reaches deep into a rock crevice or the tunnel of a weaver’s nest to grab its prey. See the picture below.

This is a fairly common resident and its identity is unmistakable.  It is also the most likely to be seen.