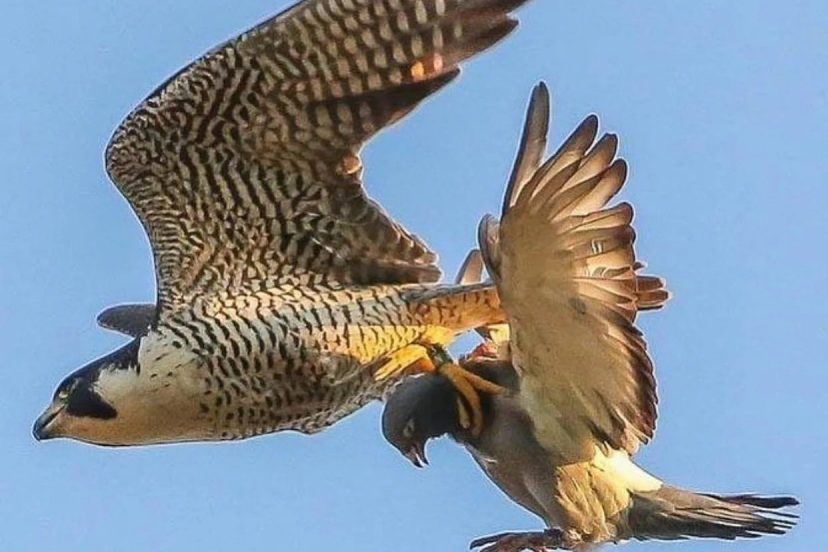 Raptors are among the biggest and most easily spotted birds in our countryside. They are also perhaps the most dramatic and exciting.

The term ‘raptor’ is not a technical term of ornithological taxonomy – that is to say, it is not really a scientific term within the study of birds – and it does not refer to one specific type of bird.  In fact, there are a number of very different species that are normally described as raptors.

Rather than naming a precise kind of bird, it really describes the way a number of different kinds of bird make their living, you might say, or how they find their food.  As a term, it’s like ‘farmer’ or ‘lorry driver’.

Raptors are ‘birds of prey’: they feed upon other animals, mainly vertebrates (i.e. animals with backbones) such as different kinds of mammals, reptiles and other birds, but also insects, which they hunt, catch and kill.  Some raptors will also feed upon carrion, which is to say, on the carcases of dead animals which they do not kill themselves but just find.

But this is not a very precise definition, because there are other birds that hunt and eat other animals, and these are not grouped among the raptors.  Kingfishers, for instance, hunt fish but they are not regarded as raptors. Some shrikes catch and eat lizards but, again, they are not raptors. A heron will eat frogs and other small birds if it gets a chance and so on, but it is not a raptor.

Because the raptors’ livelihood – catching and eating other animals – is rather specialised, they can be distinguished by a number of physical features and particularly striking body parts, especially their beaks and feet.

Their beaks are very strong and sharply curved, for ripping off the flesh from their captured prey.

Their feet, too, are very strong with long, curved and sharp nails or ‘talons’ for catching and killing their prey, and for holding the carcases while they rip the flesh with their beaks.

Hunting other animals, and especially other birds, requires special skills: most raptors are swift and expert fliers, able to twist and turn in the air to catch their fleeing prey.  This is especially true of those that catch other birds while in flight or fish in the water. They have to learn these difficult skills and manoeuvres as young birds.

We have said that raptors hunt using speed and agility. There are always exceptions, however, and some raptors such as some owls actually hunt not with speed but with stealth. They fly very slowly and silently so that they can find their prey by listening rather than by seeing and can also pounce on their prey without making any warning sound of wing movement.

Vultures are raptors that prey on the carcasses of dead animals. It is their highly acute sense of smell rather than (or as well as) sight or sound that leads them to their food.

Most raptors have very sensitive powers of sight, much more sensitive than humans, many of them (but not all) with eyes located side by side in the front of their heads (rather than on either side like chickens) to enable them to make crucial judgements about the distances and speed of their fleeing prey.

Different kinds of prey require different methods and strategies of hunting, or course; and so different raptors have adapted differently to their means of livelihood.

Some have very long and broad wings for gliding up to very great heights from which they can spot their prey.

For others, speed and agility is key to catching their prey and so their wings tend to be narrow and sharply pointed towards the end, like a modern fighter jet aircraft, rather than broad and blunt like a big transport aircraft.

Some need short wings, for they catch their prey in forests and need to be able to duck and dive through the gaps between the trees to take a monkey, for example, by surprise.

In each episode of this series, we will look at a certain kind of raptors, with examples from our local bird populations, hopefully examples that you can see and identify fairly easily yourselves.   – Stephen Buckland –