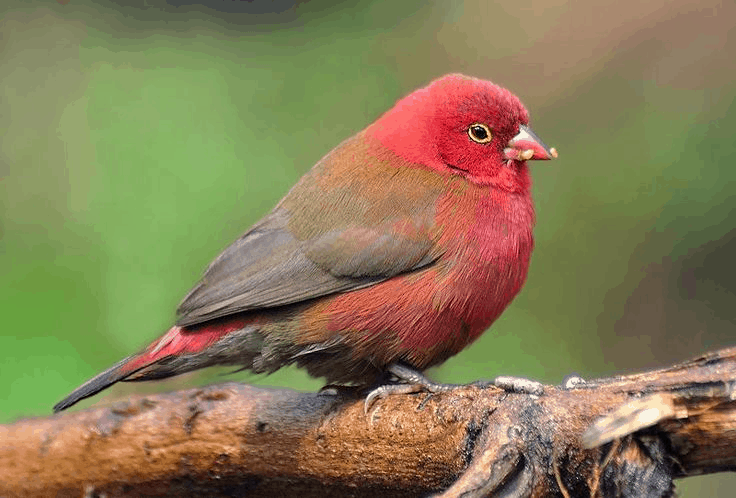 These very pretty little birds (they’re only just over 9 cms long) are often seen around our suburbs, in flocks of a dozen or so birds, often together with the similarly sized Blue Waxbills (see earlier in this series).  Together they make a bright picture early in the morning, the two species feeding happily together.  Usually, though, you will only spot them when they suddenly fly away in a whirl of fluttering: when they are hopping around on the ground, feeding on grass seeds and small insects, with their brown backs uppermost and their soft colours facing the ground, they are small and unobtrusive – almost invisible.  Indeed, they look rather dull and unremarkable until you see them close up, ideally with binoculars: the pictures above show how gorgeous they can be.  As you can see above, the female is less gaudy than the male but still beautiful with both ‘lipstick’ and ‘eye-shadow’ in soft pinkish red, which goes very well with the soft brown speckled with spots that look like pearls.

It says in my book that they are monogamous, and I always see them in pairs, a male and female together. They seem very honest and upstanding citizens and it is sad to read that their nests are parasitized by the Village Indigobird.

Like many finches, the Firefinch’s new-born chicks have curious markings on the insides of their mouths (“gape markings”) which show when they hold their mouths wide open to receive the food their parents have brought. I imagine that this helps their parents ‘post’ the food in the right place, especially if the nest is dark (in some species these are in very bright ‘day-glo’ colours, almost luminous.  It is also usually said that these gape markings evolved to enable the parents to distinguish between the open mouths of their own chicks and those of some foreign interloper such as the Indigobird, so that the right babies with the right markings get the food: the parents who consistently feed their own genetic offspring will have an evolutionary advantage over those who give the food to the parasite chicks.  The chicks of the Indigobirds, however, have evolved markings which mimic those of the Firefinches, and so they can get away with it, the rascals.  But recent research suggests that there may be other reasons for the evolution of these gape markings, rather than just this kind of protection against brood parasitism by other species, such as in this case the Indigobird.  In some species, gape markings have continued even without the presence of brood parasitism.  It seems, then, that the markings may have roots in sibling rivalry within the species, by stimulating the parents to provide food: that is to say, they may have been evolved partly by competition between sibling chicks within the same nest.  The chick with the brightest marks, perhaps, will get the most food, especially when times are hard.  It’s a hard life out there, for the birds as well!

Why do some birds mimic the songs of others?

As if it were not enough that the Indigobird parents mimic the gape markings of their hosts, they also mimic the song of the Firefinch.  As with gape markings, there is a lot we do not know for sure about song mimicry: in the case of ‘brood parasites’ like the Indigobird just mentioned, it seems to make some sense.  If the Indigobird chick does not sound like the chicks of its host, it is less likely to be fed; or so it would seem.  Presumably mimicry also enables the Indigobirds to keep in touch with and locate their unfortunate and unwitting hosts, the Firefinches, so as to sneak in and lay their eggs while the parents are not watching.  But in general, you’d think that it would only make life more confusing for all involved (not merely the birdwatchers, who also need to be birdlisteners).  A possible reason is that this ability to mimic in males might be a signal of their fitness and increase their chances of intimidating other males and attracting females of their own species.  Bird song seems to be something that – at least in the case of some birds – is learnt, to some extent: as I mentioned last week, different groups of some birds develop different melodies and sound patterns.  They must be learning new tunes from each other, and so I suppose they can learn to mimic other species.  It is hard not to think, sometimes, that, like humans, they do it for fun: I have heard a Fork-Tailed Drongo (coming up in this series) mimicking the mewing of a kitten.

The best mimic I know of is the Australian Lyre Bird: the short YouTube video below from David Attenborough’s amazing TV series on The Life of Birds is absolutely fantastic: listen to this bird mimicking other birds but also some other truly extraordinary sounds.