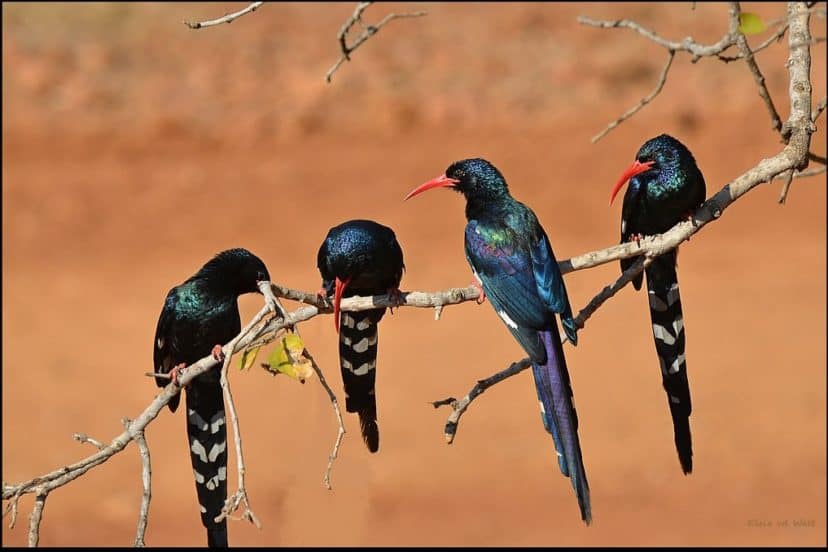 Shona: Shavi-shavi OR haya – according to Dale’s dictionary.  According to Hannan’s dictionary these names refer to completely different and unrelated birds: “shavi-shavi” is the Helmet-Shrike, and “haya” the cuckoo. This difference of opinion between the dictionaries probably represent regional differences in naming rather than error on the part of the dictionary writers (though that cannot be ruled out!).  My bird book prefers haya.  More informed views on Shona names for birds would be very welcome.)

This bird is also known as the GREEN WOOD-HOOPOE. The picture above shows hardly any green on the bird because this green colour is not caused by a green pigment but by iridescence which can only be seen when the light falls on the feathers from a particular angel. (“Iridescence”is a changing of rainbow-like color caused by differential refraction of light waves. You see it in soap bubbles or oil on water.)

Remember the African Hoopoe – the beautiful brown and black and white bird which was the first in this series?  Well, this is another, very different kind of hoopoe – though also beautiful!

You can see similarities between them, especially the long curved beak; and I assume they are related.  (The fact that two birds look similar, however, is not necessarily an indication that they are related, even if they are both called by the same name.  Birds were named and classified before the possibility of DNA studies, and recent study of this kind shows that some very dissimilar birds are in fact closely related, and that others which seem very similar are not related.  These evolutionary relationships are a much more complicated matter than was imagined only decades ago.)

This bright and noisy bird can frequently be seen and heard in groups.  The most noticeable thing about them is the giggling chorus that starts with one or two birds and is taken up by the group to a crescendo.  It sounds like loud, cheerful laughter (the books usually say “like the laughter of women”.  The sound is similar to, but nicer and less harshly cackling than, the sound of the Arrow-marked Babbler (a forthcoming attraction in this series), which are also very common around Harare.  The Wood-hoopoes move in flocks of about 7 or 8 birds, congregating in trees, searching the bark with their long, strong, probing beaks, looking for insect larvae.  That is what the bird in the picture above was doing just before he posed for the camera. You will also see them on the ground sometimes.  They also eat things like centipedes, geckos, frogs and some fruit and nectar.  They are “omnivors”: that it, ‘eaters of everything’ (though it is not, of course, true that they eat literally everything).

They are classified in my bird book as “common residents” and should have recently finished breeding in July. They are monogamous but cooperative.  This cooperation is a very interesting type of bird behaviour: the whole group assists to feed all the chicks.  They operate much like a troupe of monkeys – or a gang of street youths.  Their nests, usually in crevices in trees, are “parasitized” by Greater and Lesser Honeyguides.

“Brood parasitism”, as it is called, is another very interesting kind of behaviour in birds.  It means that one type of bird, in this case the Honeyguide, secretly lays its own eggs in the Wood-hoopoe’s nest, leaving them to be raised together with the eggs of the unknowing ‘foster’ parents.  Thus the parasites (the Honeyguides) avoid expending all the labour and energy of raising their own chicks.  It can be a nasty business, as some parasite mothers, most famously the Cuckoos, eat the eggs of the host before laying their own in the nest.  And some parasite chicks, as soon as they are hatched from the egg, begin by kicking out or killing the eggs or chicks belonging to their hosts.  We will have more on this phenomenon in future posts.

When I was a boy, we did not see the Wood-hoopoe in suburbs like this, I am pretty sure; I only ever saw them in woodland, or riverine forest, or even evergreen forest.  I think the reason may partly be to do with ecological changes that have taken place in our country.  In some parts, it is no longer outside the towns and cities that you will find most trees: now it can be in suburbs.  Wood-hoopoes, like many other species, need trees for finding their food as well as for other purposes.  Perhaps the Wood-hoopoe has come into these areas because that is where more trees are now to be found.  But this also means that in other places, where they used to be common, they can no longer survive.  The ecological relationship between birds and their habitats is a close and sometimes a very delicate one, as it is with all living things.