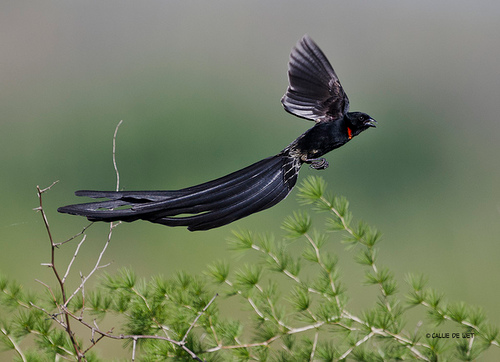 Euplectes ardens (Genus: Euplectes, Greek = woven, referring to their woven nests; Species: ardens, Latin = glowing (type description based on an inaccurate illustration which shows a red belly-spot, described as “like a glowing coal”)

This bird might actually be familiar in many different parts of Africa.  The distribution map I am looking at shows them in countries such as Guinea, Nigeria, Cameroun, DR Congo, Rwanda, Kenya, Ethiopia, Tanzania, Zambia, Malawi, Zimbabwe, Angola, Mozambique and South Africa.

What you see in the pictures above, of course, is the breeding plumage: out of breeding, they look much more like the rather drab and dull female (!) which only a rather trained eye could easily avoid mistaking it for a sparrow.  The prominent features of the male include the long and very showy tail feathers, and the red collar; the latter can sometimes be yellow or orange or even non-existent.  (Is that collar something that has been lost by those without it through evolution, or something gained by those with it?)

They are non-migrants, sedentary and gregarious, forming large flocks together with other species.  They are seed-eaters, living and nesting in long grass or reeds such as you find in the rainy season in vlei areas – before it is mostly ploughed under for maize.

I think I may have mentioned why females are often (but not always) less brightly coloured: it is most likely because they are the ones who have to sit quietly on the eggs in the nest and so need camouflage rather than gaudy.  But how are birds coloured?  You may think that it is simply that they have different coloured feathers but it is more complicated than that.

A bird’s feathers are coloured in two ways: the first is by pigment i.e. the feathers actually contain coloured substances, chemicals of different colours.  There are in fact only two main pigments in feathers: melanin, which produces either black or dark brown feathers and carotenoids, which produce red, orange or yellow feathers – like the collar in the Red-collared Widowbird above.  These can be combined to produce other colours.  While melanin is part of the make-up of the feathers (it’s what makes feathers strong, which is why the strongest feathers in the wings and tails are almost always black or dark brown), carotenoids are derived from a bird’s diet – the birds get them through eating.  In effect, they become the colour of their food.  The best example of carotenoid colouring is the red or pink colour of flamingos, which comes from the small crustaceans and algae that flamingos eat in their shallow feeding waters.  If they don’t eat plenty of that stuff, they won’t be pink and the more they eat, the pinker they will be.

The second way a bird’s feathers have colour is not through pigments at all: the feathers are not really any specific colour – it all depends on the light.  Keratin is the tough protein of which feathers are made but also the covering of the beak, the scales on the legs and feet.  Some of it is actually translucent and reflects the light of a particular spectrum, especially blues and greens.  Depending on the angle of light, the bird (the best example around Zimbabwe, or perhaps anywhere, is the glossy starling) looks either bright blue or glossy green or even just black.  In fact, of course, it is none of these colours: the light is passing in effect through a prism.  Think of that: birds as flying prisms.  This effect is called ‘iridescence’.  Sometimes the keratin is dotted with air spaces by a process known as ‘scattering’, which causes a kind of shimmering effect.

In many feathers, the precise colour is actually a result of a combination of both pigments (melanin and carotenoids) and iridescence: so, for example, the green feathers of many parrots are produced by a mixture of blue light produced by iridescent scattering combined with yellow carotenoid pigments derived from diet.  I said above that there are two main pigments, melanin and carotenoids: in fact, the only other bird pigments in the world are found in just one kind of bird, the turaco, (see below, with a green Livingstone’s Turaco below that).  These two special pigments are even named after the turacos: turacin which is red and turacoverdin which is green.  Other birds have to mix other colours to get their greens and reds: the turaco use their very own patented pigments – ‘Turaco Red’ and ‘Turaco Green’.  Living paint-boxes!