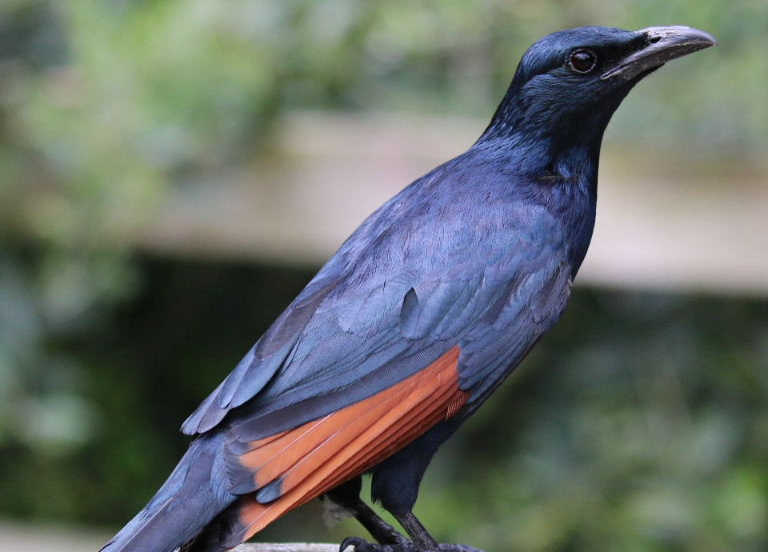 Before you go any further, have a look at the scientific name and its derivation, which you probably skip over normally.  It is both more complex than usual, and also interestingly uncertain about whether it comes from Greek or Latin!  Can you pronounce Onychognathus?  It does not exactly trip off the tongue, though it is always fun to pronounce the “..gnath…” sound as in “prognathous”, which is a word that should be more useful than it is.  Or at least I think so.

That beak is actually rather claw-like, one has to admit.  “Red-winged Starling” is certainly easier to say, although, depending on the way the bird is sitting, it is not always easy or possible to see the red-brown on the ‘primary’ wing feathers when it is at rest: it can look rather drably black, though females have a grey wash on head and neck.  The red-brown is then seen as a sudden flash when it takes flight.  The second picture above, not perhaps so good in pictorial quality, does illustrate how the colour can be seen in a sudden burst from the underside of the wing in flight.  The first picture might give an exaggerated impression of their size: in fact they are not particularly large, being more or less the same size as the blue glossy starlings that we seem to see more of these days.

According to the distribution map that I looked at, these birds are resident in a satisfyingly long strip all the way from Cape Town, along the east of South Africa, through Zimbabwe, parts of Zambia, Tanzania, parts of Kenya and Ethiopia.  Resident they may be, but they certainly travel around in large flocks, and here we don’t normally see them (unless I am mistaken) until the rains are thinking about coming: the large flocks passing over have a distinctive in-flight call (which I could not find in the recordings) which makes me think of this time of year, with buds on the trees sticky with sap.

They can be with you for a week or two, and then they’re gone again: I am sure they make the rounds of suburbs like this looking for their preferred food, which is nectar and fruit, and hang around while it is available.  Like all nectivorous birds, they need to supplement their diet with insects, since nectar though rich in carbohydrates contains little protein.

In ‘the wild’, as it were, they often roost on rock faces and this gives them an unfortunate habit, it must be admitted, when they take to dwelling in suburbia.  They tend to hang around and enter large buildings – halls and churches and such – to roost overnight, sometimes failing to find the way out in the morning.  That can be noisy and messy, and some people don’t like them flying around inside, making their rather piercing alarm call.

I have a memory of my father in church one evening here in the Mount Pleasant parish: there had been workmen in the roof and they had obviously left piles of bright shiny nails – quite large nails – lying around on the rafters and trusses.  There were some Red-wing Starlings inside the church and, attracted to these objects, they were picking them up and dropping them on the congregation during mass.  One missed my father’s head by only a short distance: and they were not particularly small nails.    I can never think of Red-Winged Starlings, without that memory.