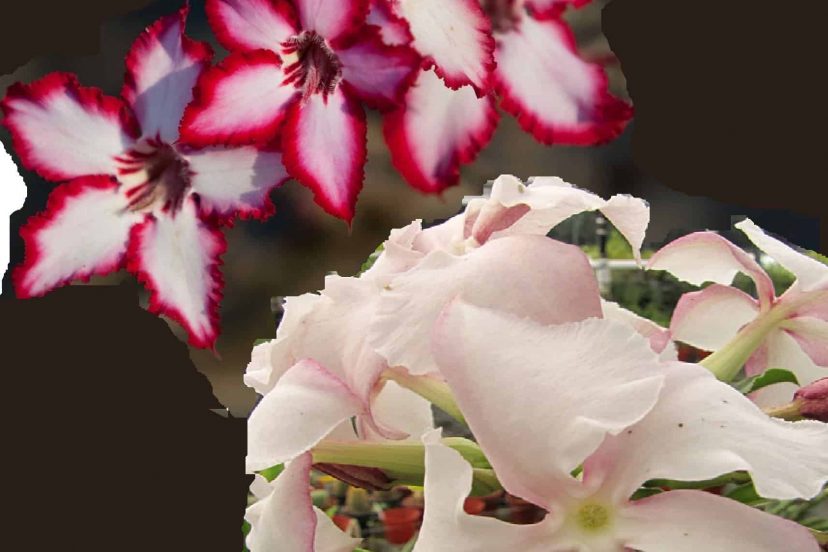 In this article we are going to look at two flowering shrubs that grow in the southern low-veld of Zimbabwe, the Sabi Star and the Runde (formerly Lundi) Star. They both are:

The Adenium genus only grows in areas up to 1000m altitude and  is found in South Africa and Eswatini (used to be called Swaziland), throughout Zimbabwe where the conditions are suitable, and northwards into Malawi and Zambia.

Sabi star shrubs grow to between 30cm and 3m tall. They favour sandy soils, growing well in open, rocky, sunny places usually in dry woodlands. In areas where these plants occur, there is generally only a sparse population.  The genus Adenium features stems that are swollen, and often odd shapes. The stems and tubers (some of which are below ground) store water, helping the plants survive very hot, dry conditions for which they are well adapted. (They do not grow well in water-logged or frosty conditions.)

The leaves are bunched at the end of the branches. They lose these leaves in the dry winter, so as not to be transpiring scarce water. And just as they lose their leaves their beautiful flowers emerge along their branches, during the cool, dry season, from May to September. Its flowers are very pretty, white with a pink or red edging.

They eventually dry and split open to release seeds that are wind-borne, if they haven’t already been eaten by the many hungry little desert creatures.

All of the different species in this genus have sap which is poisonous. Domestic animals have been reported to die from feeding on this plant. However, wild animals have been observed to take in the poisonous sap with no negative impact.

The large hawk-moth (Daphnis nerii) is often found in association with the Sabi star. The larvae of this moth feeds on the Sabi star. This moth is found in large areas of Africa, Asia and some Hawaiian islands. It is migratory, flying to eastern and southern Europe (particularly Turkey) during the summer. This moth was introduced to control invasive oleander (Nerium oleander), a small tree or shrub, which has been cultivated world-wide, for landscaping, gardening and ornamental reasons. In some countries (e.g. Hawaii) it is used to pollinate plants that are threatened there, such as the Hawaiian palm (cabbage-on-a-stick) and other similar species, which were previously being hand-pollinated, in order to save them.

This genus, Adenium, and this species, the Sabi star, are under threat due to removal for horticulture and medicinal use. The plants are sought after as they are highly ornamental, especially when flowering, and can be grown in gardens and in pots. The habitat of this plant, furthermore, is under threat as, in the areas where it grows, the environment is often degraded due to cattle, over-grazing, drought, and other natural and man-made factors (Flora of Zimbabwe, 2018). Extracts from the bark and roots of the Sabi star are used medicinally for numerous ailments, such as muscular sprains, heart attacks, fever, paralysis and many more (Herbpathy, 2021).

The generic name Pachypodium is derived from the Greek word pachy which means thick, and, podus which means foot, and refers to their characteristic thick and swollen stem bases, much of it being underground.The “saundersii” part refers to Sir Charles James Renault Saunders (1857 until 1935). He collected the first specimen of this plant at the end of the 19th century, in Natal, South Africa (Flora of Zimbabwe, 2018).

The genus Pachypodium has approximately 20 species; five of these species are native to Africa, and the rest are native to Madagascar. Pachypodium is closely related to the Sabi star (Adenium multiflorum, discussed above), but is different from it in that the stipules (see definition section of this report) at the base of the leaves are developed into long rigid spines.

Pachypodiums are succulents. (See distinction between succulents and cactuses.) The most obvious characteristic of these Pachypodium species is their grossly thickened stem. They are adapted to grow in hot, sunny, dry and rocky locations. They exhibit a wide range of bizarre growth forms, from bottle-, cigar- or candelabrum-shaped trees to dwarf plants with very short stalks. Sizes range from a few cm to more than 8 m. In southern Africa, the magical elephant’s trunk or halfmens (Pachypodium namaquanum) is probably one of the best known species in the genus).

Many of the species produce spectacular flowers.

The Runde star is generally found in dry open woodlands, growing amongst rocks, in the southern and eastern parts of Zimbabwe, up to an altitude of 600m. This species is also found in southern Mozambique, South Africa (Northern Province, KwaZulu-Natal and Mpumalanga provinces) and in Eswatini, previously Swaziland (Flora of Zimbabwe, 2018).

The Runde star is a low succulent shrub, growing to a height of 2 m. The trunk is large, short and swollen (as previously mentioned). The bark is pale grey and smooth. There are many branches off the main base trunk, which are slender, twisting and sprawling, with long straight thorns on them, at regular intervals. The fairly sparse leaves are approximately 8 by 2.5 cm in size. The leaves are narrow and obovate (shaped like an egg with the narrower end at the base), thin and hairless, and arranged spirally around the branches/stems (Flora of Zimbabwe, 2018).

The tubular stems (much of it is underground) function as water stores, helping the plants to survive extremely hot conditions and long periods of drought. The plants dry-out during the dry season, but as soon as it rains (after a few days), become spongy and then solid (PZA-SANBI, 2019).

Runde stars flower from February to May each year. The flowers are white, often with a touch of pink or purple on the outside of the tubular base (corolla). The flowers are eye-catching, shaped like trumpets and approximately five cm in diameter. They are positioned in clumps at the end of each branch or twig.

The seeds are about 7 mm long with a tuft of gold-coloured hairs 5 cm long at their apex (upper-most pointed end). This species apparently grows fast and easily. The tufts of hair on the seeds suggest that they are dispersed by wind; but it is thought that insects, birds and small rodents also assist with seed dispersal

is specially protected under the National Parks and Wildlife Act 1996, and is also classified as having ‘vulnerable’ status, according to the Red Data List (regional or local list). None of the various species in the genus Pachypodium appear on the International Red List, but various species appear on regional and individual country Red Lists. P. ambongense, P. baronii and P. decaryi are listed on CITES Appendix I and all other Pachypodium species on Appendix II (PZI.SANBI, 2019).

This species is under threat mainly because of urbanization and agriculture. These two factors have caused a decline in the habitats and distribution of these plants. This species is especially at risk as it is a smaller, slower-growing species of plant. Some authors think that propagating and cultivating this genus of species may be the only way to ensure its long-term survival.