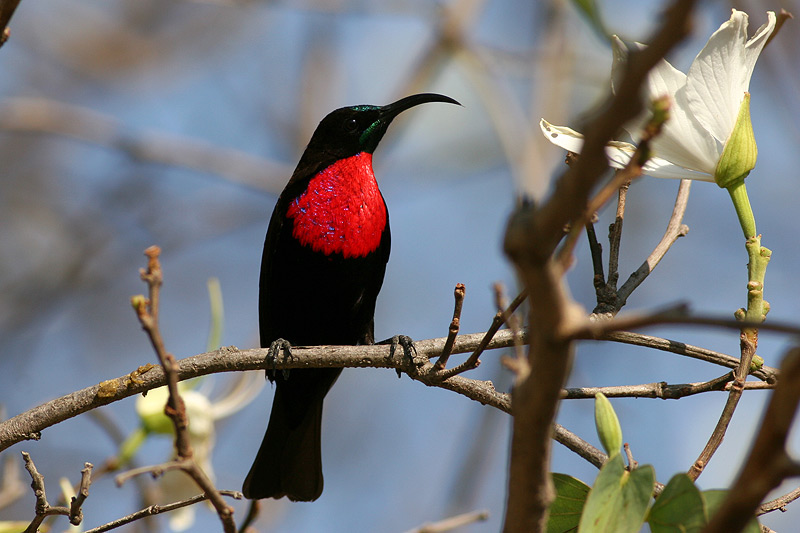 This is, I think, the handsomest of the five species of sunbirds that I have spotted in and around our campus: now, in these Lockdown Days, this seems a good time to show him off.  I have seen one on the windowsill in my bedroom looking in, as much as to say ‘can I come in?’.

Actually, it is more likely that it was looking for insects, small spiders and so on, on the window pane and in the cobwebby crevices of the window sill and frame.  The top photo shows off the red breast very well, and this is the thing that is most immediately striking about this bird: a flash of brilliant scarlet, which even puts the beautiful poinsettia flowers to shame.  Have you ever seen quite such a scarlet scarlet?  I added the second one because there you get a good view of the iridescent green throat and forecrown which, depending on the light, is often not so obvious.

Is that a bauhinia tree the first one is sitting on?  Anyway, the flowers are important for this bird, both for the nectar and the small spiders and small insects which it also takes.  It is a common resident with sedentary, locally migratory or highly nomadic populations.

What do these words mean, exactly and in this case?  Actually, the glossary in my field-guide bird book is not as helpful as it might be: none of these words appear in the list.  It will tell you that “squamosal” means scale-like (which is a useful one to remember), and that a “precocial” bird is one that is active from hatching and leaves the nest soon afterwards (see also “altricial”, meaning more or less the opposite i.e. helpless on hatching and needing to be fed by adults – like human beings, in fact).

Like most, or I imagine all, sunbirds, this bird is, then, a ‘nectarivor’.  Nectarivores pay for the food they get from flowers by helping with the pollination process: pollen often sticks to their beaks or breasts or foreheads and is deposited in the next flower.  Sometimes, though, when the flowers they feed on are very deep, too deep for the length of their beaks, they instead pierce a hole at the base of the flower and get at the nectar that way.  My sunbird feeder is hung above some canna lilies which are in flower at the moment, and I see this happening all the time.

Robbing the nectar in this way means, of course, that the birds do not get dusted with pollen which is at the front of the flower, which is to say, they don’t play their part in the canna’s process of reproduction.  This practice is known as “nectar robbing”, since they get away with the much needed and ‘high-octane’ fuel without paying their dues to the flowers that provide it.  Of course, if they always did that, then the flowers would not flourish and might even die out (if the flowers depended solely on the birds for pollination), which would be bad for the birds as well: no plants, no flowers; no flowers, no nectar; no nectar, no birds.

So there has to be a balance: the system can cope with a certain number of birds stealing but not too many.  Like human beings, in fact.  (In fact, of course, these canna lilies have long given up the practice of propagating themselves by seed; or rather, I suppose, it has been bred out of them.)

Sunbirds have specially shaped beaks, of course, for feeding from flowers, but also specially long tongues, much longer than the beak.  The tongues are usually deeply grooved or even tubular for drawing up the nectar and have brush-like tips that can collect nectar more efficiently.  Nectar is their staple.  But, while it is very high in carbohydrates, it is low in protein, which is why they need to supplement the diet with insects and “other small invertebrates” (that’ll be the spiders, I guess…).  Unlike human beings, in fact.