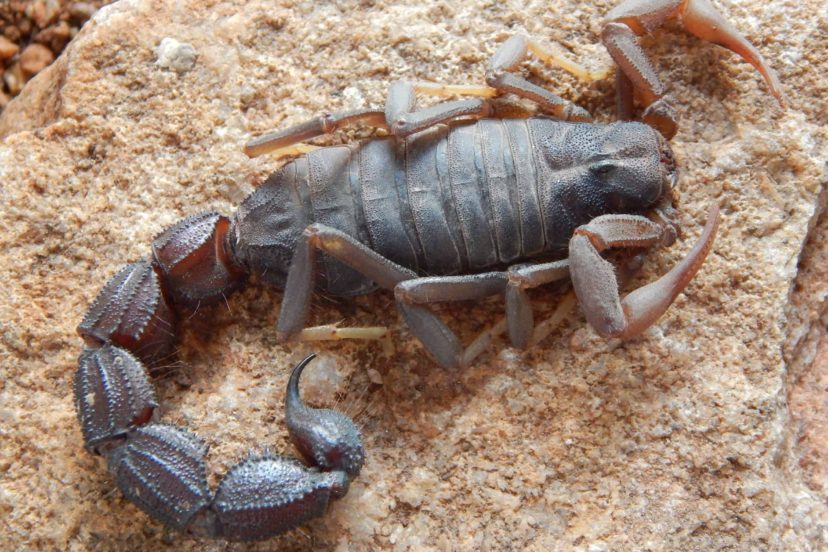 With the onset of the hot and humid weather, scorpions will be out in abundance, having hibernated during the cooler months. It is during these coming months that many people are stung, and little information is available about which scorpions are dangerous and when and what medical treatment should be given. I hope this article will clarify the many misconceptions about scorpions and scorpionism in this country.

All scorpions have neurotoxic venom and the venom gland is situated at the end of the tail. However, the effect and use of it vary from family to family. There are three families of scorpions in Zimbabwe:- The rock scorpions and tree scorpions (Hormuridae), the burrowing scorpions (Scorpionidae) and the thick-tailed scorpions (Buthidae).

The rock scorpions, Hadogenes, are very large dark scorpions which live between rocks and bark of trees. The total body length of the female is about 180 mm and the tails of the males are exceptionally long and thin and they can measure 210 mm in total body length. In spite of their size, they are not aggressive and rarely use their sting, relying on their broad pincers for defense and prey capture. The pincers and tail segments are richly endowed with long sensory hairs which enable this scorpion to detect both prey and predator. Rock scorpions are superbly adapted for living in close spaces. The tail is laterally compressed and in the normal resting posture is curled on its side, and the pincers, body and legs are flat.

The tree scorpions, Opistacanthus, are also dark in colour with an orange tip to the tail. They are smaller than the rock scorpions (about 10cm in length), slow moving and non-aggressive. They live under bark of trees, especially acacias trees as well as in scrapes under rocks, and are often found hanging upside down from the overhead rock.

Stings from Hormurid scorpions cause mild localized pain lasting for about twenty minutes and mild swelling for less than forty-eight hours. No other effect should be felt.

Burrowing Scorpions, Opistophthalmus, loosen the soil with their powerful jaws and scrape it out with their strong, short legs and the last segment of the tail, hence the tail is somewhat thicker and more muscular than the Hormurids. The burrow entry-ways are characteristically oval in cross-section, conforming to the cross section of a scorpion’s body. The pincers are stout and rounded, enabling the scorpion to seal off the burrow when necessary. When alarmed some species make a hissing sound by rubbing the outer surface of the jaws against the hard under edge of the carapace.

Burrowing scorpions usually forage on the surface in the area immediately around their burrows.  Most activities such as birth and maternal care, moulting, and feeding take place in the burrow. For this reason Opistophthalmus females are unlikely to be encountered, but males may be seen during the mating season when they abandon their burrows in search of a female. Humans are therefore rarely stung by burrowing scorpions.

Stings from Opistophthalmus are more painful than those of the Hormurids, with localised pain and swelling lasting for up to a week. There have also been several reports of mild systemic reactions lasting for 8-24 hrs.

Common buthid species are Hottentotta and the lesser  thick-tail scorpions, Uroplectes.  Hottentotta trilineatus (eastern nomad scorpion), Uroplectes flavoviridis (the yellow lesser thick-tail scorpion) and U. planimanus (orange lesser-tailed) which are found under rocks and logs while U. vittatus ( stripped lesser thick-tailed) is found under the bark of trees. These are all small slender-bodied scorpions reaching a maximum of 7cm. U. flavoviridis is a dark green to green and yellow scorpion, and the others are yellow to orange scorpions with black markings. Their pedipalps are small, while their tails are fairly thick. They are extremely aggressive and when disturbed, will sting readily.  Many people are stung by U. vittatus when collecting firewood or sitting on logs and U. flavoviridis is probably responsible for most scorpion stings in Zimbabwe.

Stings of Hottentotta and Uroplectes cause severe burning pain lasting 24-48 hours, followed by a dull ache for a week, sometimes a mild local inflammation occurs, no other symptoms should appear. Paracetamol can be taken to relieve the pain, and a cold compress applied immediately to localize the venom. Antihistamines have no effect on scorpion stings.

Parabuthus (thick-tailed scorpions) species have highly toxic venoms which they use to overpower their prey and drive off adversaries by stinging them.  The nippers serve merely to hold their prey whilst it is being stung.  The thick tail accommodates powerful muscles which ensure that the sting penetrates deeply into the victim’s body so that the venom is quickly dispersed.  Parabuthus species are very aggressive and will sting readily.  When disturbed, they raise their abdomens off the ground and curl their tails up tightly, ready to flick the sting forward.  These scorpions may also make a hissing noise by scraping the sting along a granulated area on the upper surface of the first two tail segments.

Parabuthus mossambicensis is a yellowish scorpion, 60-90 mm in length, constructs a shallow burrow usually under rocks. They are found in the lowveld and southern regions of Zimbabwe.

Parabuthus transvaalicus is a black scorpion, 85-145 mm long, is one of the largest thick tailed scorpions in the world and releases more venom than any other scorpion species. When disturbed it can squirt venom from the sting over a distance of about a metre. This species scrape out a shallow retreat under rocks and logs and occur in the southern regions of Zimbabwe.

Parabuthus raudus is also a large, yellowish scorpion, 75-100mm in length, and has a black end to its tail which is lacking in P. mossambicensis. P. raudus is only found in the Kalahari sand system where it digs shallow burrows at the base of shrubs in the sandy soils. A few specimens have been found in shallow scrapes under rocks and logs, but never under loose bark.

Parabuthus granulatus is a brownish scorpion, 75-115 mm long, is more slender and finely granulated than the above three species.  It is the most venomous scorpion in Southern Africa yet the volume of poison released is about a third of that released by P. transvaalicus. P. granulatus lives in shallow excavations at the base of shrubs and under stones in sandy areas.

Parabuthus kuanyamarum, a yellowish scorpion, is one of the smaller species of Parabuthus and has only recently been collected in Zimbabwe.  It burrows into the sand dunes of the Kalahari sand system.  It has never been found under rocks in sandy areas or in regions of hard gritty soils.

The sting causes immediate excruciating pain of a burning sensation. The pain lasts for a variable period, usually extending from a few hours to one day, maybe longer. Within an hour, however, systemic symptoms may also be experienced and hospitalisation is recommended. These symptoms include:

Children who have been stung may have signs and symptoms similar to those seen in adults, but the most outstanding clinical feature is a unique form of restlessness, characterised by crying and screaming, uncontrollable jerking of the extremities, chaotic thrashing movements, flailing and writhing. The patient is unable to lie still and is difficult to restrain. This restlessness has been described as “extraordinary and duplicated by little else in medicine”.

The spectrum and degree of symptoms is determined by a number of factors, including the species involved, the body mass and physical health of the victim, and the amount of venom injected. Those with lung and heart problems are at greater risk. Deaths, resulting from respiratory and/or heart failure have occurred in Zimbabwe as a result of stings from Parabuthus transvaalicus and P. granulatus. Anti-venom is available from the South African Institute of Medical Research, Johannesburg, and should be applied by a medical doctor without delay.  Intravenous administration of calcium gluconate is moderately effective for relief of generalised muscle pain and cramp, but its effect lasts for 20-30 minutes only and there is also a limit to the amount that can be administered.

If eye envenomation occurs, wash the patient’s eye out with clean running water.

Morphine and derivatives, barbiturates and meperidine SHOULD NOT BE USED for the treatment of pain, as these drugs induce synergistic reactions with scorpion venoms which greatly increase the convulsions and the possibility of death.

To prevent being stung by scorpions, keep the area around the house or campsite free of rocks, logs, piles of rubble and leaf litter.  Never walk at night with bare feet or sandals and always shake out shoes and clothing before dressing.