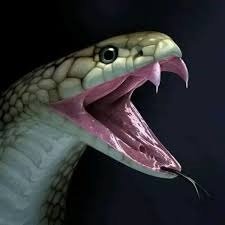 Snake dentition is a complex subject and helps scientists to distinguish very different categories of snake.

The first important distinction to be made is between snake teeth and snake fangs. All snakes have teeth but they are not used for chewing food as mammal teeth are – snakes swallow their food whole. Snake teeth are solid and not designed to deliver venom. They are angled backwards to hook the snake’s live prey and prevent it from sliding out of the mouth and escaping.

Some snakes, like pythons, only have fixed, solid teeth and deal with their prey by constriction, not by the injection of venom. Other snake species, however, have fangs as well as teeth. Snake fangs are hollow or grooved and are attached to venom sacks and are used for injecting venom into prey.

In this article we will tackle the subject of snake dentition by looking at the placement of fangs in the snake’s mouth, e.g. front fanged or back fanged as well as the structure of the different types of fang e.g. hollow, front grooved.

Snake teeth can be categorized into four different groups, summarized in the chart below and then explained in greater detail

Venom harvesting and History of Fang development – see video below

Zimbabwean Snakes: an Overview of the Deadly-Dozen (plus Python)

People and snakes have had a complex and somewhat negative relationship since Biblical times; which, apart…

Meet The Man with Unique Calling

Click below to read about this man's unusual skill. http://www.newsdzezimbabwe.co.uk/2020/09/meet-zimbabwes-largest-snake-collector.html