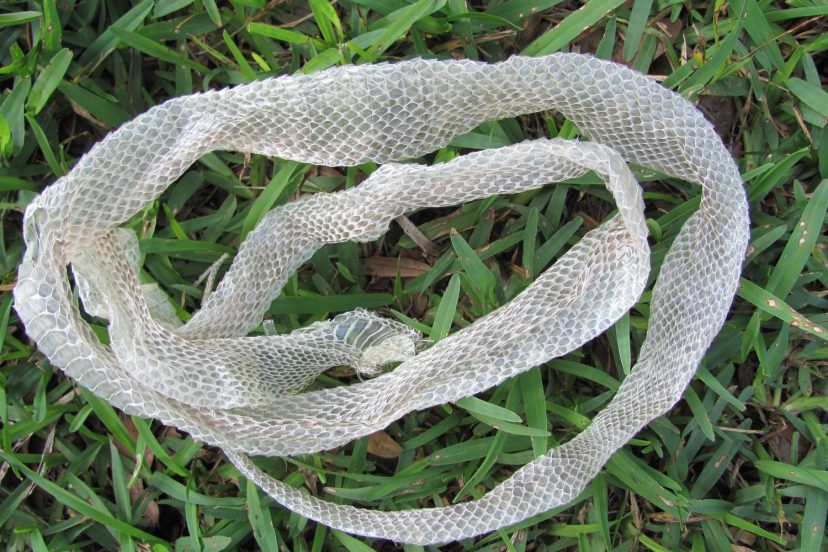 All snakes shed their skin, regularly. In this article we will discuss why and how they do this but first of all it is important to understand that all animals shed their skin. Humans, for example, shed millions of skin cells a day but because the skin cells are microscopic and it is a continual process, it is not generally very noticeable.

The skin of any living thing is the primary buffer between its internal structures and its surroundings and therefore the skin is constantly subject to wear or damage.

The first line of defense that skin provides against this damage is a scab and scar formation.

The second line of defense is the constant production of new cells in the deeper layers of the skin to replace cells lost or worn away from the surface. If you have been burnt or have had a part of your skin damaged by something rubbing on it your skin will have healed itself, produced new skin and your old, damaged skin will be shed and you might have noticed the old skin peeling off in sheets.

Skin shedding in reptiles is different. Reptiles shed skin in a periodic event rather than continually.  In snakes the cell replacement procedure has been highly modified and the replacement cells are not constantly produced independently of one another but grow on the same cycle and form a single unit. Snakes therefore shed a layer of skin in one continuous piece, a process called “ecdysis”.

How a Snake Sheds its Skin

Why do snakes shed their skins?

There are two reasons that snakes shed their skins.

How often does shedding take place?

Snakes can shed their skin as often as once a month, although it is usually only two to four times a year. Many factors can affect when snakes shed, including species, age, weather and temperature, nutritional health and the presence of bacteria or parasites. Dormant snakes (in winter) do not shed, but quite often this is one of the first events to take place after the end of winter.  Younger snakes typically shed more than adults (sometimes as often as every couple of weeks) because they are still growing. Snakes also often shed their skin before reproduction or after giving birth.

How do snakes shed their skins?

A couple of days before shedding the snake releases a hormone that loosens the bond between the inner and outer skin. The snake’s eyes become a milky blue and look opaque or clouded, an indication of a physiological loosening of the skin that forms the eye cap (This phase impedes the snake’s vision and the snake generally finds a safe place to hide during this vulnerable period.) Their skin in general looks a bit dull and can change colour a bit.

The eyes clear and the snake rubs its head on something abrasive like a rock or a log to create a rip the outer layer of its skin, around the mouth and nose.

The snake then works on the tear, crawling through tight places, wriggling against rocks and plants and flexing its muscles, progressively sliding out of the skin, leaving the old skin inside out, much like peeling off a sock. The process can take from days to a couple weeks, depending on size, body condition and environment. They are left with a new, functional skin resplendent in fresh, bright colours.

The snake’s skin is elastic and it stretches during the shedding process. The shed skin is therefore likely to be much longer than snake itself.

Since it is made up of both the hard keratin scales and a bit of the softer dermis, it feels both rough and soft.

Snakes are covered with scales, which are hardened folds in the epidermal layers of the skin. These scales are usually arranged in rows along the body, the numbers and arrangement of which are characteristic of the species. When snakes shed their skin, you can see many of the details of the species, such as the scales and banding patterns or other markings and you can sometimes determine the species of snake from its skin because of banding patterns and other visible markings.

The following video is an excellent record of the whole process of a snake shedding its skin. Even though the footage is speeded up the video still takes 10 minutes.

Fish found in the Zambezi River