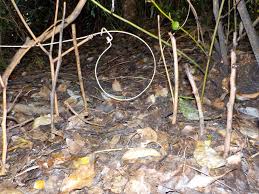 Snares are one of the simplest traps and are very effective. They are cheap to produce and easy to set in large numbers and are widely used in Zimbabwe, especially by the rural population, to augment often scarce food.

A snare consists of a noose or running loop, made usually of wire or a strong string, which is suspended from a branch or small tree or stake and set up on a path or trail or narrow passage way regularly used by animals or outside burrows. The snare catches an animal by the neck or by the leg or around the body as it is walking along the trail. As the animal continues moving forward, the snare pulls tight, trapping the animal.

Snares are designed to kill by strangulation or crushing of vital organs. However, snares do not discriminate and will capture any animal (considered edible or not) by any body part. In almost all cases death is hugely delayed and painful. Sometimes the animal that has been trapped pulls the snare away from its attachment point and continues to live with the snare cutting into its body.

What follows is a brief account of a snaring incident – which has a relatively happy outcome but which will provide some food for thought on the inhumane nature of snaring as a form of hunting.

The veterinarian Dr Rob Rees was approached by Painted Dog Conservation Trust (PDC) to try and remove a snare from the hind right leg of a male painted dog that had been photographed in the Chokomela Concession to the north of Hwange National Park.

After several days of difficult tracking Dr. Rees was able to dart the animal in question and bring it to the PDC hospital and rehabilitation facility near Hwange National Park.

Regrettably the snare had been on the dog for about a month and the Achilles tendon was severed and fibular damaged.  The lower part of the leg was showing signs of necrosis. The surrounding muscles had contracted so that it was no longer possible for the leg to be extended. Doctor Rees and Doctor Savage amputated the damaged leg mid-femur.

Recovery was uneventful and the dog was returned to the pack 10 days later.