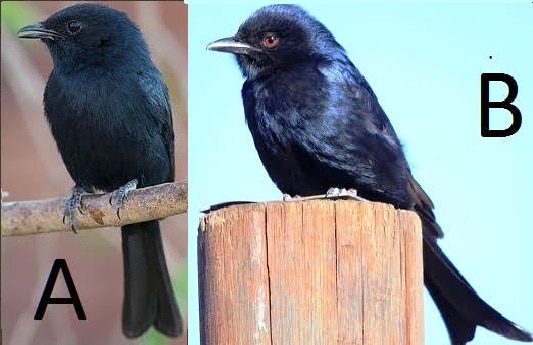 What do you see in this picture?  What look like two pictures of the same bird are actually, of course, pictures of two entirely different birds.  Take time to look more closely and try to spot the differences.  They are even harder to see when the bird is alive and hopping around in a tree, of course.  At first one can hardly notice any differences.  They are both around the same size, though A is in fact slightly smaller.  They are both entirely black, though in flight their wing feathers are partially translucent and so the wings appear pale in colour. The legs and feet are both grey.  They both behave rather similarly too: they are both ‘hawkers’.  That is, they sit on a branch or other high vantage point watching for flying or crawling insects, then suddenly flutter out and collect their prey, either in the air or from the ground.  My book says they differ in habitat though I have seen them both here on and around the campus.  It is always fun to tell which is which.

But look more closely at the pictures.  Notice, first, that A’s eye is black and B’s is red: that is one of the most obvious differences, though often you can probably only see this through binoculars.  The beaks, too: B’s is slightly heavier than A’s – but only slightly.  The shape of the tail can be an easy distinguishing mark: B’s tail is deeply forked, while A’s tail, though it has a bit of a fork, this is much shallower.  Tails, however, are working parts of the flying equipment and are constantly being opened and closed, and in practice I have often found myself unsure of what I am looking at.  Look at the shape of the head: isn’t it the case that B has a rounder head, and A a slightly flatter one?  The position of the eye, too: B’s is closer to the centre of the head and A’s is nearer the front.  It is usually said that B has a ‘stockier’, more bulky body shape than A, and that shows in the photos above.  But in practice body and head shape change as feathers are fluffed up or down.

These things – eye colour, shape and position, beak, body shape, plumage colour and shape etc. – are typical distinguishing marks for different species of birds, though many different aspects of behaviour – styles of flight (is it slow and swooping, or swift and direct? for example), modes of moving on the ground  (walking? hopping? running?), preferred perches in trees (right at the top in full view? skulking in the lower branches)? and so on – all of these things, and more, can give a clue to what you are seeing.  And the song or call, of course.  You just have to get used to looking for these kinds of things: it isn’t easy at first to learn a new way of looking, but it is rewarding once you learn it.   As it happens, the Fork-tailed Drongo is a noticeably more aggressive and cocky little bird than the more demure Flycatcher.  The Drongo is well known for chasing other much bigger birds, including large raptors.  They are very vocal birds also, with a distinct, raspy voice which they use to make a wide variety of quite loud noises: if I hear a call that I don’t recognise immediately, my first thought is to look for the Drongo.  They are good mimics too: I have heard them imitate the calls of a number of different birds, including the Gabar Goshawk.  I have more than once heard one imitate the mewing of a kitten (there are sometimes feral kittens hanging around the garden).

When we distinguish between two kinds of birds, as we have done between A and B above, what exactly are we distinguishing between?  I have done it by identifying certain visible physical characteristics which separate two different species: the Southern Black Flycatcher and the Fork-tailed Drongo – they look different (if only slightly).  Are we, then, just distinguishing between differently shaped/coloured/behaving birds?  Is that what it is to be a bird of a particular kind, to belong to a particular species?  Physical characteristics like beak shape and so on, as we know, have actually developed and changed over time as a result of evolution: remember Charles Darwin and the Galapagos finches.  What if two different species developed in similar ways in response to similar environmental challenges, as a result of similar random mutations?  They could end up looking very similar.  Would that be a case of two different species merging into one? Zoologists usually define the boundaries of a species by the possibility of breeding and producing offspring: birds of the same species can breed productively (though that is not in fact as straightforward as it sounds).
In any case, what is happening now is that the technology of DNA analysis is being applied to distinguish different species: I am told that this is resulting in some surprising rearrangements of bird ‘taxonomy’ i.e. categorization into species etc.  Birds that don’t look much alike turn out to be closely related, and vice versa.  DNA analysis may end up by showing a very different set of species ‘structures’ underneath the physical characteristics, as it were.  Is this going to give us a ‘truer’ taxonomy?  It won’t be as useful in the field, that’s for sure.  The traditional bird books, such as the ones I use, are based on the older taxonomy which is much easier to use because it depends on actually observable clues: you can easily find your way around the taxonomy by these visible clues.  Perhaps we need to get used to both.

While we are on the subject of distinguishing birds that look very similar there is a lovely little book entitled “Look-Alike Birds” (by Kenneth Newman and Derek Solomon, published by Southern Book Publishers) that is very helpful in this regard. Below is an extract concerning the two birds Stephen Buckland discusses above plus two others that might also be confused with each other.