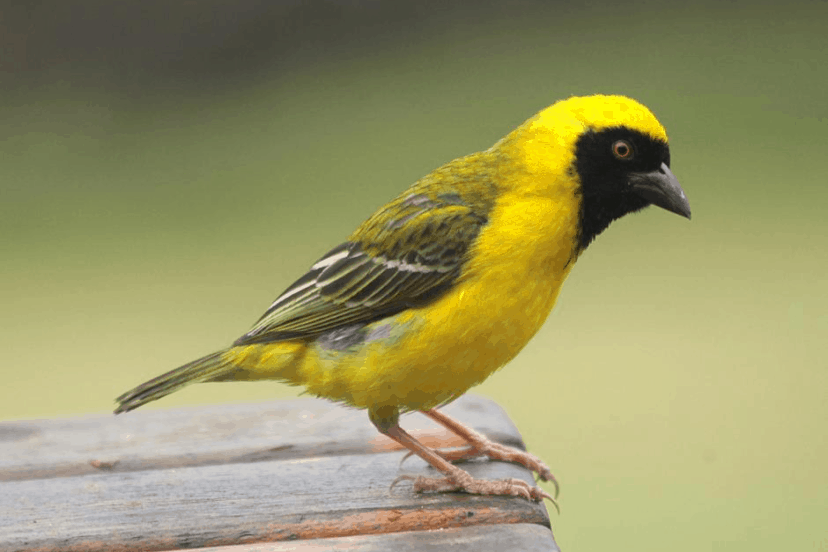 This is a very noticeable bird, both noise-wise and vision-wise. It is bright and cheerful and, especially when building nests, makes a very distinctive “buzzing, swizzling, and churring” noise from a prominent place in a tree – a noise that, for me, is very reminiscent of my childhood: at home, there was a tree outside our house where they always built nests.  These nests are very obvious and no attempt is made to disguise or hide them from predators.  They are intricately woven of long grass leaves, picked and worked while they are green and strong and flexible: later they dry out to a dull brown.  These nests are beautiful things.  The males frantically build (it can take some days) and then, when the structure is finished, will sit in a nearby branch – with much swizzling and churring and flapping of wings – to try to entice a female to come in and take up residence.

Females will come in to inspect and, as often as not, will be displeased with the nest, finding that it does not reach the high standards for a suitable home for her and her eggs and chicks, and she will begin to tear it down.  Quite often you can find a brand new, unused (and, to our eyes, perfectly good) nest lying on the ground underneath a tree: it has been rejected by the female.  Which means, of course, that the male will have to start again; which they lose no time in doing.

This business of attracting a mate and rearing offspring that will have their genes is a crucial point in their lives.  They are ‘polygynous’, meaning that the males have more than one ‘wife’.  I just don’t know whether each of those ‘wives’ is faithful to only one ‘husband’, or whether she also mates with others; in general, it seems that there is a lot more of what we would call ‘infidelity’ or even ‘adultery’ in the world of birds than we thought at one time.  For females, the most important thing – a responsibility which they take very seriously – is to ensure that her offspring inherit the best available genes, and the capacity to build a good nest that will keep the female and her chicks safe is obviously a very important criterion for a mate.  The males have to work hard to win a good ‘wife’.

To keep snakes and other tree climbing predators away from the eggs and chicks, they build these nests right out on the ends of long thin branches, often in thorn trees or hanging out over water (if they are near a river or pool), which makes it harder for some animals to get to the nests.  They also position the entrance to the nest underneath, so that to enter you have to climb up and in and round a corner – easy for the birds but not for some other predators.  I have, however, seen an African Harrier Hawk robbing weaver nests, with its specially long and double jointed legs that can reach inside these nests with ease and pull out a nice plump young chick.  Weaver’s nests are also sometimes parasitized by the Diderick Cuckoo, and measures have to be taken to prevent these from entering the nests as well.

Different species of weaver build different designs of nests, some with very long tunnel entrances that dangle below the nest: it is all designed to make it harder for different kinds of predator (or nest-parasite, like the cuckoo) to get in.  There is an interesting relationship between the nests these birds build and the type of predators that are likely to try to steal eggs or chicks: as the predators learn how to overcome the obstacles put in their way by the birds, the birds themselves have to develop better obstacles to try to keep them out – if they don’t the species will not survive.  Natural selection in action!  If the birds don’t stay a step ahead of the predators, they won’t reproduce in large enough numbers and the species will not survive; and if the predators don’t find ways around the latest obstacles, they will lose an important food source for their own survival.  And so the battle goes on.

Here’s video clip of the bird building its nest: