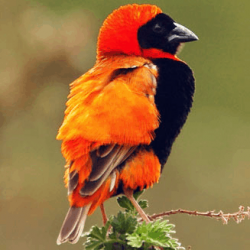 What you see above is very much the male’s breeding finery, his full liturgical plumage, designed precisely to draw attention – though they are, of course, interested not in your attention but that of female Red Bishops.  (Yes, there are plenty of female Bishops in the birdworld, though, in our eyes, they are rather dull to look at.  Male bishop birds, on the other hand, find them irresistible.) Out of breeding time, the male’s normal plumage is also pretty unremarkable, and if you did spot one you’d easily mistake it for a rather undistinguished sparrow.

As the Greek name indicates, they make very neat and pretty woven nests slung between the reeds and tall grass in which they like to build.  They are seed-eaters, of course, as you can tell by the beak, which explains why they breed at this time of the year (plenty of seed around), though they do take insects and nectar as well, apparently.  In the days when the neighbouring plot was left to grow more wild than it is now, there used to be small flocks of these lovely birds buzzing around like jewels on wings, chattering away and doing their southern red bishop thing.

Male birds of most species have to work hard to win a wife, and these male Red Bishops spend a lot of time showing off and making themselves obvious.  More recently, the tendency to plough that field and plant patches of maize and so on has reduced the habitat, so they are fewer and they’re not actually so obvious anymore.  I caught a quick flash of bright red in that field the other day, but it wasn’t enough to know for sure that they are there.  After breeding, they will be packing away their flashy clobber to become almost invisible until next year, when the breeding business starts all over again.

I grew up calling them “Bishop Birds” rather than just “Bishops”, and it still sounds slightly disrespectful of the higher clergy to drop the ornithological specification.  But, I suppose, in these unreligious or even anti-clerical times, what else can one expect?  Why “Bishop”, anyway?  They don’t look particularly like any actual bishops that I know – though I could not resist adding the third photo above which I have to say makes them look deliciously ridiculous, like something out of The Muppet Show.  He doesn’t look pleased; I imagine he would prefer to be photographed in profile.  Wisely so, I’d say if asked.  I guess that it is the colour that presses the ‘bishop’ button, though I think that red is the colour of cardinals rather than bishops: isn’t that more purple?  In any case it seems, from the photos above, that the colour can vary between a bright ‘cardinal red’ and a rich orange.  There are, though I’ve not seen one for a long time, yellow bishops (I am still referring to the birds, of course).

They are commonly parasitized by the Diderick Cuckoo, poor things, though I have yet to see one of those around here.