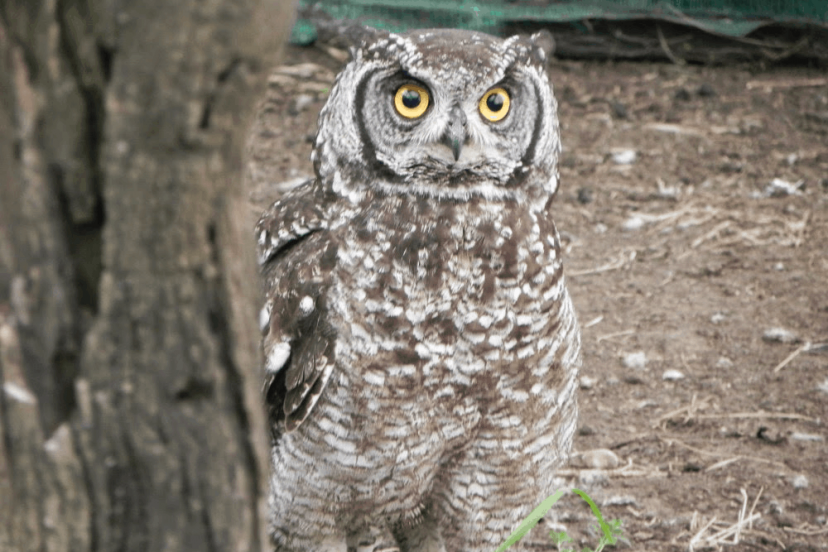 This is a big and impressive bird: 45 cm long and weighing 700 g.  I have recently seen a pair hunting at night around our neighbourhood, and in the past have spotted them on the roofs in the early evening and sometimes standing on the ground (as in the picture above).  Their lovely haunting call – “hoo hoooo!  hoo-hoooo!” – is very evocative, though terrifying, no doubt, to those of a mousy disposition.  (There is a good version of the call on the YouTube link above.  I am guessing that the bird in the video is a female, as I believe that the female, slightly more loquacious, has three hoos and the male only two.  Make of that what you will.)

At close quarters, they can be quite startling: those huge accusing eyes.  It is called a “Spotted Eagle Owl” because of the spotted breast: that does not come out as clearly in the pictures above as it does in our local examples, where the spots are clearer against a creamy background.

The tufts on the head, by the way, are not ears, or at least they have nothing to do with hearing.  The owl’s hearing is very acute indeed and of vital importance for hunting: the rustling movement of the mouse or other small creature attracts their hungry attention.  Their hearing is actually assisted not by those tufts but rather by the characteristic flat ‘face disk’ which directs the sound into the bird’s ears (which are simply holes hidden under the feathers) and also can act as a ‘direction finder’ to help locate the sound of potential prey.  Neither are the tufts horns: they are feathers which can be raised and lowered, and are probably more to do with ‘display’: a threatening look, perhaps, rather like a frown for us.

Owls, of course, are nocturnal: during the day they sit quietly in trees or rocks, practically invisible unless they move, the prominent eyes kept closed, or nearly closed, to attract less attention.  Those eyes are large and very sensitive, of course, for night vision: the larger the eye, the more light they can capture.

Notice the very broad wings: this makes it possible to fly very slowly without losing lift.  As a general rule, I think, fast flying birds have narrower wings and slow flying ones broad wings: think of swifts and swallows with wings like knife-blades and, on the other hand, slow drifters and soarers like storks and herons and hammerkops.

(I presume that seagulls, which do have quite narrow wings but can sometimes hang almost stationary in the air, are an exception because they are almost always flying in windy conditions at the sea and so get plenty of lift from the wind speed alone.)  I have noticed that large aircraft also make their wings broader during landing and take off, and then retract these extensions when going at full speed, and I suppose the principle is the same: a broader wing gives greater lift and so allows slower flight, while a narrow wing needs greater speed to get the same amount of lift and reduced air resistance.

Owls’ wings also have another interesting adaptation: it is important when they hunt not only to be able to hear their prey but also to avoid being heard.  Wings can be very noisy, with all that wind rushing over them, and it can prevent the owl from hearing its prey and perhaps also alert the prey to the owl’s approach.

If you have ever had a falcon fly past you at close range and top speed, it sounds like a mini jet aircraft.  Owls’ wings are equipped with special silencers – fluffy feathers on the leading edge which break up the air flow and reduce the wind-rush noise.  They almost float in dark silent space.

The other morning, we had a tremendous noise coming from a tree in a neighbouring garden: a flock of Arrow-Marked Babblers were shouting all together, and were joined by a variety of other birds, most noticeably the Fork-Tailed Drongos which are famously fearless birds.  The noise went on without stopping for at least 15 minutes; it was literally quite deafening.  In fact, there was a single Eagle-Owl (a young bird?) sitting in the tree that was at the centre of all the commotion.  The other birds in the garden simply would not tolerate his (her?) presence and kept up the noise until, eventually, it left.

More than one of us thought of the situation of immigrants who, merely by their presence, attract the fear and sometimes violence of the residents: a kind of avian zenophobia.  In fact, I don’t think (but am I right?) that smaller birds have anything really to fear from an owl in their midst; nor is there much that they can do to harm such a big bird.  But they can certainly make a deafening noise; which is what they did.

At the end of this ‘Birds’ section is a ‘links’ post which contains a video of “Bird flight sound comparison” which you might find interesting.