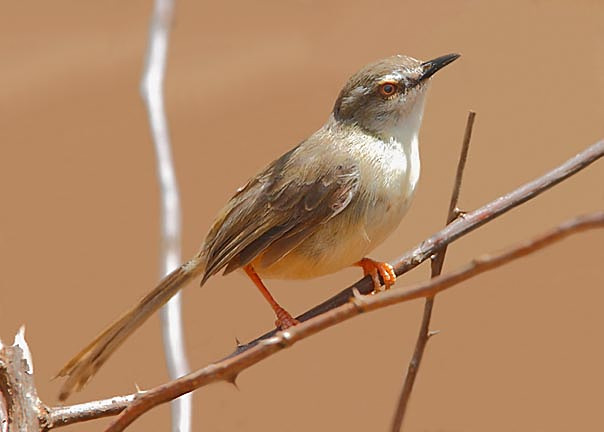 It is usually the call of this small bird that first draws attention, as it is at first sight rather unremarkable to look at and usually blends pretty much unseen into the dusty grasses and bushes.  They are quick movers, and don’t sit around waiting to be observed and described – except perhaps when singing their hearts out.

But it is worth having a closer look.  Observe the first of the photos above: there is a definite eye-stripe, pale but clearly visible if you get a chance; a grey cap and whitish throat and breast.  Notice the rather ragged edges on the wings and also the tail: the feathers there are not so exactly aligned as they are in other birds and you can clearly distinguish individual feathers.  It looks kind of ruffled or rumpled, especially when in a bit of a wind.  It has what my book calls “buffy underparts”, and you can just see orangey-yellow on the underparts in the top photo.  Presumably, this is the reference of the Latin species name, subflava, meaning “almost yellow”; those must be the “tawny flanks” in the English name.

“Buffy”, “orangey-yellow”, “almost yellow”, “tawny”: is it just the usual difficulty of finding the right name for a very precise shade of colour?  Or do different birds in different places differ slightly in colour?  It could of course be both of these: the dozens of photos of this bird on the internet suggest that there are differences in the birds (and of course different cameras and different prints of photos can also explain it).

But there must be differences, for that is how natural selection works: variations that are transferred across generations can prove advantageous or disadvantageous for survival, attracting mates, breeding and rearing chicks, and so increase or decrease populations relative to competitors.  It’s hard to imagine, but even small changes in colour might have this kind of effect.

I recently listened to a science programme reporting a study on insects (crickets, I think they were) that live close to very noisy motorways in the UK.  Apparently the traffic noise prevents the females from properly hearing the noise that the males make to attract them – the noise by which the females judge which are the most suitable (= most likely to produce good strong viable offspring) makes with which to mate.  The result is that they are not mating with the best males and so the delicate evolutionary mechanism that ensures the continued survival of the group is jeopardised.  Who’d have thought?  Save the crickets: ride a bike.

Where was I?  Oh yes, observe the second of the photos: one usefully distinctive thing about this bird, which is not actually mentioned in my book (though it would certainly be helpful if it had been) is its habit of holding its tail up very high at times, and even raising and lowering it.  In the second photo you see the tail raised up high.  Presumably this has some function in terms of communication or display, perhaps somehow related to survival or sex.  But then, what on earth isn’t somehow related to survival or sex?

They are common residents, usually operating in pairs or small family groups in among the long grass but also in small bushes, especially along watercourses and in gardens.  You can see them clinging to a long grass stem, shouting their lungs out, wagging their tails up and down.  They are insectivorous though they are not above sneaking a nip of nectar from the aloes in flower.  They’re monogamous but, poor hapless things, prey to the Cuckoo Finch which parasitizes their nests, tricking them into rearing chicks that are not their own.  Life is unfair sometimes.

I notice that, rather unusually, the Genus name for this bird is not in the usual classical languages, Greek or Latin: the local Javanese name has been adopted instead.  Why, I wonder?  There must be a story behind it somewhere.  It cannot be a coincidence that this Javanese word – or at least how a Javanese word was once heard by non-Javanese who then tried to write it down – does actually sound rather as if it might have been Latin: prinia, prinia, priniam etc.  (I won’t go on.  I am not sure I could.)

However that may be, it is nice to think that I now know at least one word of Javanese which can now, in my mouth, sometimes be heard over the African plains.  From which we all came, in the beginning.