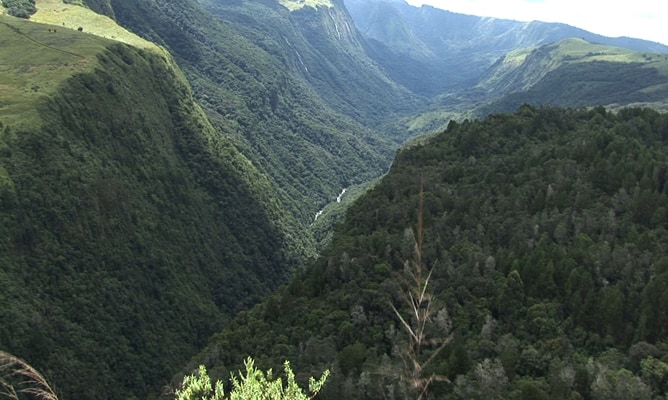 These notes are intended to increase an awareness of the beauty and biodiversity of the Bvumba and hopefully a desire to conserve our natural heritage.

Biodiversity literally means “ diversity of life”, but it is much more than just the number of species: it is also the interaction of the various species and their environment. A diverse ecosystem is more resilient to extreme conditions such as drought, flood, intense fires, pests and diseases. For this reason and for the health of the planet, restoring and maintaining biodiversity is one of the UN Global Sustainability Goals and focus of the international Convention on Biodiversity, of which Zimbabwe is a signatory.

Why is the Bvumba important for Biodiversity?

The Bvumba mountains form an important link in the chain of highlands along Zimbabwe’s eastern border with Mozambique. The highlands extend from Nyanga in the north to Chipinge in the south, with Bvumba centred in between. These highlands in turn form part of the African Eastern Arc mountains, extending from Ethiopia and Tanzania all the way down to the Drakensberg in South Africa and Lesotho and onto the Cape.

Figure 1: Topographical map of a section of Africa showing the mountain chain (marked with a red line) from the Ethiopian Highlands along the edge of the Great Rift Valley and south along eastern border of Zimbabwe to the Drakensberg mountains in South African and Lesotho. The position of the Bvumba is indicated.

The mountains are like stepping stones in a “sea” of savanna and lowland woodlands and because of their isolation, the montane habitats support many vertebrate and invertebrate species that have restricted ranges, or are endemic to particular mountain ranges. For this reason alone, conservation of biodiversity along the mountain chain is of primary importance. If the habitats in one section of the chain are destroyed or greatly modified, the long term survival of associated species will be limited as the opportunities for gene flow between the isolated patches become reduced even further. So as the montane habitats shrink, the chances of species’ extinctions increase.

Since the mountains are also the sources of rivers feeding lower lying areas, any destruction of the montane habitats will also have a major impact in the water quality and availability to communities living downstream. Conservation of montane biodiversity can be directly linked to human welfare. This is particularly true of the Bvumba mountains: they are the headwaters for several rivers, the largest being the Revue river that supplies water for the Chicamba Real Dam in Mozambique.

The biodiversity of the Eastern Highlands of Zimbabwe is generally not well documented and poorly understood. There are a considerable number of invertebrate and fungi species still to be collected and undoubtedly some will be new to science. The flora is fairly well known but only in general species checklists and vegetation descriptions. Empirical data is lacking, although we do know that the moist evergreen forests contain the highest number of threatened plant species in the country (Mapaura & Timberlake, 2002). The vertebrates are slightly better known, particularly mammals and birds, but again specific information on distribution, populations, and species’ particular requirements is missing.

The complex patterns of Bvumba’s forests, grasslands and woodlands are a combination of climate, altitude, aspect and soil type. The montane climate is moderate with maximum temperatures rarely reaching 28◦C in October and winter temperatures only occasionally dropping to 0◦C in July. The altitude ranges from 1890 metres above sea level on the top of Nyamheni Rock (Castle Beacon) to 642 metres above sea level  in the Burma Valley below. The mountains form a barrier to the easterly rain-bearing winds from the Mozambique Channel, forcing the winds upwards so they condense and form mist and rain, creating ideal conditions for evergreen moist forests such as the Bunga Forest.Effect of aspect

In contrast, the western sides of the mountains are in rain shadow and vegetation is drier and typical miombo (Brachystegia) woodland. The Bvumba soils are well leached, fairly low in nutrients, acidic and the thick layers of humus in the forests are a critical source of nutrients for the trees. The forests give way to grasslands in places where the underlying granite/gneiss rock is close to the surface and trees cannot easily root and establish themselves. The core/essence of the Bvumba biodiversity lies in the unique combination of vegetation types that occur next to each other. The rolling grassy hills are in sharp contrast to the evergreen forests of the Bunga Forest Botanical Reserve, and areas around Leopard Rock and Lion’s Head (Zohwe Mountain). There are small patches of Mist belt Brachystegia woodland where the Msasa (Brachystegia spiciformis) trees are draped with lichens, orchids, mosses, ferns and succulents that are sustained by the frequent cool, damp mists. Chinyakwaremba, the mountain above Leopard Rock Hotel, is a good example of medium altitude montane grassland – a habitat type that is extremely restricted in the Bvumba through the encroachment of agriculture, and the invasion of alien trees such as wattle, blackwood and eucalyptus. The cool moist climate provides ideal conditions for a wide variety of mosses, ferns and orchids. Of the approximately 1433 species of plants recorded in the Bvumba montane area (Timberlake, et al., work in progress) there are 137 species of ferns and 145 species of orchids. Many of these have highly specific habitat requirements: some only grow in the top canopy of the forest, others in the damp leaf litter of the forest floor, and others have close associations with another species. An example of this is the beautifully delicate fern Asplenium hypomelas which occurs as an epiphyte on the Spiny Tree Fern (Cyathea manniana). Because of the specific habitat requirements of many montane plants, any changes such as the loss of tree cover or invasion of alien plant species such as the ginger lily (Hedychium gardnerianum) into the shrub understorey can drastically alter the forest ecology.

The moist Bvumba forests also have a wide variety of fungi from tiny little mushrooms that are phosphorescent and glow in the dark, to the larger more robust bracket fungi and intriguing puff balls. Cathy Sharp has been studying the Bvumba fungi and is discovering species that are new to science. She is in the process of developing a checklist of fungi for the Bvumba. Many of the Bvumba fungi are saprophytic meaning they use dead material as their source of nutrition. They therefore form a vital role in the decomposition of plant and animal materials and the recycling of nutrients. Destruction of the forests leads to the loss of these fungi and the loss of soil nutrients.

Insects and other Invertebrates

As stated earlier, the invertebrate fauna of the whole Eastern Highlands is poorly known. What we do know is that there are several species of Lepidoptera (butterflies and moths) that are of biodiversity significance in the Bvumba area (Pringle, Henning & Ball, 1994). These include the five rare species of butterflies:

As with plants, many invertebrates have specific habitat requirements and in the case of butterflies and moths, specific host plants for the caterpillar stage of their life cycle. Burning and felling the forests and modifying the shrub under-storey through invasion of weeds and alien plants, has a direct impact on the insect populations. Since insects are a food source for many other species e.g. spiders, birds, frogs, reptiles, mammals, the impact of the loss is multiplied all the way up the food chain.

Of the 16 endemic reptiles and amphibians found in the Eastern Highlands, the following six species have been recorded or are likely to occur in the Bvumba (Broadley, 2002):

· Manica Blind Limbless Skink (Typhlosaurus bicolor) Habitat: Under rocks in montane grassland and miombo woodland. Mutare is the type locality and it is common on Murahwa’s Hill.

· Forest Rain Frog (Probreviceps rhodesianus) Habitat: Montane forest but not known if it occurs in the Bvumba.

The Bvumba avifauna was well studied for over 20 years, particularly by A.J. Manson, C. Manson and P. Mwadziwana who lived at Seldomseen (Harwin, et al.,1994). A total of 242 species are recorded on the checklist, ranging from Globally Threatened and Restricted Range species, Afrotropical Highlands, East African Coast and Zambezian species. A full list of these species can be found in Childes and Mundy (loc cit.), however of particular conservation concern are:

· Blue Swallow (Hirundo atrocaerulea) – were recorded breeding at Partridge Hill dam and were regularly seen feeding along the Chinamata river below Seldomseen, but much of their grassland feeding area has been invaded by wattle and blackwood.

· Gurney’s Sugarbird (Promerops gurneyi) move through the grasslands in search of flowering proteas that are a source of nectar, hence their name sugarbird.

The Bvumba is also the type locality for the following Eastern Highlands endemic subspecies and species (M.P.S. Irwin, pers. comm.):

Of great interest and importance is the presence of Crowned Eagles (Stephanoaetus coronatus) that can be seen cruising above canopy of the forest below Bunga View. These magnificent raptors are threatened in the whole region through the loss of their forest habitat. Other raptors of note are Peregrine and Lanner Falcons that cruise the thermals rising from the cliffs in search of their prey in the forests down below. Augur Buzzards and Rock Kestrels are a common sight cruising above the grasslands and along the edge of the mountains.

Other mammals that can be seen are African Civet and White tailed, Banded and Slender Mongoose.

The Bvumba forests are threatened by felling of trees and clearing for agriculture with little regard to the critical role they play in trapping rainwater, preventing soil erosion and flooding.

The forests are also threatened by the invasion of alien plants such as the ginger lily which outcompete the indigenous plants for space and nutrients. The ginger lily does not appear to be eaten by any animal and does not have any natural controlling factor.

The Bvumba grasslands are threatened with overgrazing by cattle, and invasion by alien trees such as blackwood, wattle, eucalyptus and to a lesser extent, pine. The trees also have no natural predators and controlling factors so are capable of changing an open grassland into a dense thicket within a few years. This change has an impact on the soils and the grassland flora and fauna.

Fire is a natural process but too frequent hot fires damage the grass roots, expose the soil and stimulate the germination of blackwood and wattle.

We hope that this has given you an introduction to the wealth of natural beauty of the Bvumba and that you are encouraged to find out more and enjoy it yourself. These notes are part of Seldomseen’s contribution to the Friends of the Vumba (FoTV) awareness programme. We compiled the information from our own knowledge and observations and any errors are ours. We welcome any comments and feedback.

Timberlake, J.R. et al. (2019) Checklist of Plants of the Bvumba Highlands. In prep.