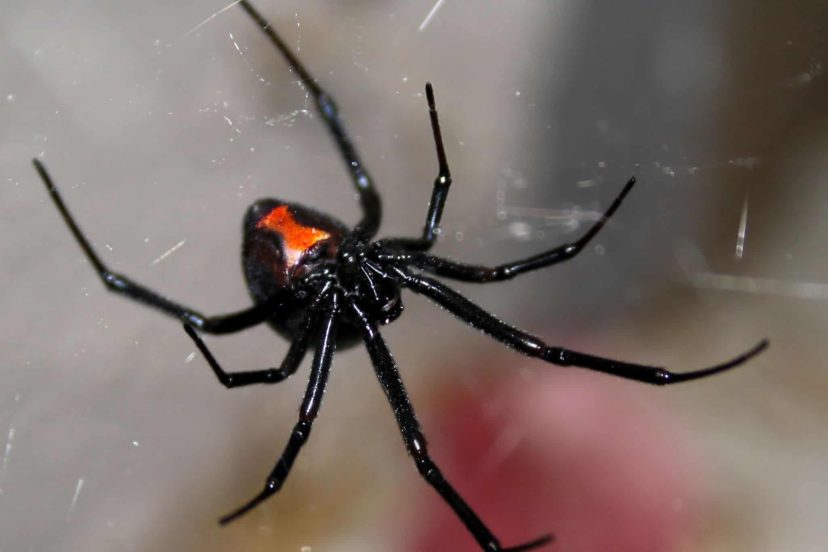 Zimbabwe has a rich spider fauna. With the exception of a few species, all spiders have venom which is secreted by a poison gland and injected though a fang. This venom is mainly used to kill the large numbers of insects and mites on which they feed daily. As far as is known the venom of only a few species is potentially dangerous to man. Most spiders avoid contact with man and will only bite in self-defence if they are touched or crushed. In most cases such a spider bite only causes pain and a slight swelling around the bite site.

Only the female of the species is able to bite through the skin of humans, and in most cases a full dose of venom is not injected. The male is only 3mm long, is rarely seen and is not considered to be of medical importance. The venom of Button spiders is of a neurotoxic nature and causes systemic symptoms and localised pain. Death can occur in young children and people with heart and lung problems who are most sensitive to the poison.

The average body length of the female (legs included) is 15mm. The abdomen is spherical (reminiscent of an old-fashioned boot button – hence the name) and shiny black or dark brown in colour. The dorsal (top) side of the abdomen is decorated with red marks that vary from a single stripe or several cross stripes in the immature spiders to a small red dot above the spinnerets in the adult female. In some cases it is black without any markings. The ventral (belly) side of the adult abdomen is unmarked. This is a very important characteristic, distinguishing it from the less dangerous Brown and Rhodesian Widows. The legs are long, thin and black, with the third pair of legs shorter than the rest.

The two species occurs quite commonly in the veld throughout Zimbabwe, but is also found in suburban gardens. The female spins an extremely strong but untidy web. In the veld this is made mostly at the base of small bushes or in large grass and grain tufts. It is also found under large cow-pats, logs, rocks, planks, sheets of iron or other debris. The egg sac is attached inside the nest, is about 10mm in diameter and white to cream in colour with a smooth spherical surface. When molested, these spiders usually sham death.

The bite is a mere pinprick with occasional burning pain at the site of the bite. The following symptoms may occur within 15-60 minutes:

Antivenom is available from the South African Institute of Medical Research, Johannesburg: Tel (110) 640-7130 (a/h 640-5959).  If this is unavailable, calcium gluconate 10% (10cm3) can be given intravenously by a medical doctor to reduce the effect of the poison and provide temporary relief. If the victim is not given medical treatment, the intense pain and muscle spasms may last 24-48 hours. This can lead to a general state of exhaustion and dehydration. Muscle pain and weakness may persist for much longer, even up to a month.

The degree to which serious symptoms are experienced will depend largely on how much venom has been injected and how sensitive one is to the poison.

The build and size of the brown widow is the same as that of the black widow. There is, however, a variation in body colour from cream to grey or brown or black. The dorsal (top) surface of the abdomen is usually marked with yellow and brown patterns. The ventral (belly) side of the abdomen displays the characteristic orange-red hour-glass marking. The legs are long with lighter and darker stripes giving them a banded appearance.

This species is found extensively in built-up areas and is common on the outside of houses. The female spins an irregular web, often under sills, gutters and drainpipes and in drains. The nest is usually 40-60cm above the ground.  In the wild it often nests in the hollows of tree trunks. The egg sac is clearly distinguishable from that of the Black Widow by its spiky appearance. The Brown Widow is found throughout Zimbabwe.

The venom of the Brown Widow is much less (3-4 times less) dangerous to man than that of the Black Widow. The bite of the Brown Widow usually causes mild localised symptoms with stiffness in the surrounding muscles and sometimes a slight fever. These symptoms may be accompanied by increased sweating around the wound and weakness in the legs. The symptoms usually clear up within 1-2 days although some patients may experience a feeling of local discomfort for an extended period.

Morphologically this spider cannot be distinguished from the Brown Widow. It does, however, differ with regard to its biochemical analysis, the internal structure of the genitals and the shape of the egg sac. The egg sac of this spider is 2 1/2 times larger, looser and woollier and does not have the spiky appearance of that of the Brown Widow. This species appears to be restricted to the northern parts of Zimbabwe.

This photo is taken from a 1972 article, “A New Species of Widow Spider (Genus Latrodectus) from Southern Africa” written by the Rhodesia schoolboy Ian Mackay who made the first observation.

Very little is known about this species and its exact toxicity to man has not yet been established.  It should be regarded as potentially harmful to man.

Scorpions and Scorpionism in Zimbabwe

With the onset of the hot and humid weather, scorpions will be out in abundance, having…

Most people take these spiders for granted because they are so familiar a sight, but very…