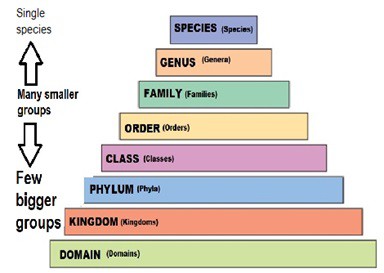 And Adam gave names to all cattle, and to the fowl of the air, and to every beast of the field.

Every scientifically identified living organism (plant, animal, lichen, algae, virus, bacteria) has a scientific name and most have at least one common name.

Notice that in the series on birds in this website the author starts each article with a collection of names for the bird.

As a safari guide or hunter you will want to be comfortable with common, local vernacular and English names but also with scientific names and able to understand and use them accurately.

Where did scientific names originate from?

The man who formalized the modern system of naming organisms was Charles Linnaeus (1707-1778), a Swedish botanist, zoologist, and physician who.  He is known as the “Father of Modern Taxonomy” and there are still a number of species which were originally identified and classified by him.

Linnaeus’ system is known as the Binomial Naming System, (bi = two and “nomial” = naming) referring to having or using two names and used especially to refer to the scientific names of living organisms. Each organism is referred to by its genus name followed by its species name – e.g. Felis domesticus for the domestic cat, Homo sapiens for humans, Panthera leo for lions, Crocodylus nioloticus for the crocodile.

Do scientific names have to be Latin?

When Linnaeus was working Latin was the language of science and educated people from all over the world communicated in Latin, no matter what their mother tongue. Many of the names originally given were in Latin and it is still a strong tradition to use Latin for naming new species.

In fact, however, scientific names don’t have to be Latin. A number of classical Greek words are also used but scientific names can be taken from any language. Then the rules of Latin grammar, gender and pronunciation are applied to them to make them uniform.

The names are often chosen because they are descriptive of some feature of the organism using, for example, Latin adjectives like:

Something an organism can be named after the geographical location where it occurs:

People’s names can be turned into their Latin version. There are plants in Zimbabwe that have a species name “wildi” named after the botanist Hiram Wild (father of our contributor on plants).  When people’s names are adapted in this way apostrophies, hyphens, gaps and capitals are eliminated, e.g.

At the basis of all scientific names for living things is the science of taxonomy – which you only need to understand in a very general way. Taxonomy is the scientific categorizing and naming of life forms, putting things into defining groups on the basis of shared characteristics and then arranging the groups in bigger groupings. Each living organism ends up with a unique, “specific” scientific name or “species” name.

The major categories of classification in this system are Species, Genus, Family, Order, Class, Phylum, Kingdom and Domain.  The smallest category is “Species”. Every living thing has its own unique species name e.g. A lion’s species name is “leo”. The species name of the crocodile in our part of the world is “niloticus”.

Who decides on the official scientific name of an organism?

Every known living organism on Earth is classified and named by a clear set of rules, hugely refined since Linneaus’ day. These days there are committees of specialized scientists (botanists naming plants, zoologists naming animals, etc.) who debate the classifications of organisms and apply the rules so that the scientific community can agree where each organism is placed in categories in relation to each other organism.

In the plant section of this website you will see an article on the name “acacia” which explains why the name cannot any longer be used for thorny African trees but is instead used for a large group of Australian trees.  This decision (which was not popular with many African botanists) was made in 2014 at the International Botanical Congress in Melbourne, Australia, after examination of huge quantities of scientific data presented by assorted expert botanists, arguing from the rules.

How do I show scientific names in writing?

You will also notice that when a scientist has referred to an organism by its genus and species name in an article he is she will then go on the abbreviate the genus name to its first initial for the rest of the article.

In the article on scorpions, in this website, you will find the following example.

In this example the common name of each type of scorpion is used in italics after each scientific name and where you find “U.” that is an abbreviation for the Uroplectes just mentioned.

You will find that some of the more common scientific names will become second nature to you through repetition and others you will begin to recognise when you see them. This article provides a few pointers that will make this process of familiarisation easier.

HH.SEPT.17 – QU. 2  Deﬁne the term “echolocation” as practiced by most mammals of the Order Chiroptera. 2 mk

HH.SEPT.17 – QU. 7    What are the gestation periods of the following animals:

LAW.SEPT.17 – QU. 13    James has been asked by a private game park owner to pick ﬂowers of Gloriosa superba for ornamental purposes at his home. What legal advice would you give him 3 mk

HH.FEB.18 – Qu.4    What are the gestation periods of the following animals:

GP.SEPT.18 – Qu.11    Both male and female giraffes (Giraffa camelopardalis) have horns. Which has tufts of hair on the horns? 1 mk

HH.SEPT.18 – Qu.1  Which habitat type is best described by the following:

HH.SEPT.18 – Qu.2    Echolocation is characteristic in mammals of the order Chiroptera. Deﬁne the term ‘echolocation’.  2 mks

HH.SEPT.18 – Qu.7   What are the gestation periods of the following mammals:

HH.FEB.19 – QU.2  Of the 12 mammalian Orders that exist in Zimbabwe, which one is the most successful living mammalian order and give reasons why it is very successful.  3 mks

HH.FEB.19 – QU.7  What are the gestation periods of the following animals?

HH.SEPT.19 – QU. 5   The aardwolf looks like a hyaena in both structure and diet (sic) but differs from the hyaena in that it mostly feeds on insects hence it belongs to the Order Insectivora. True/False     2 mks