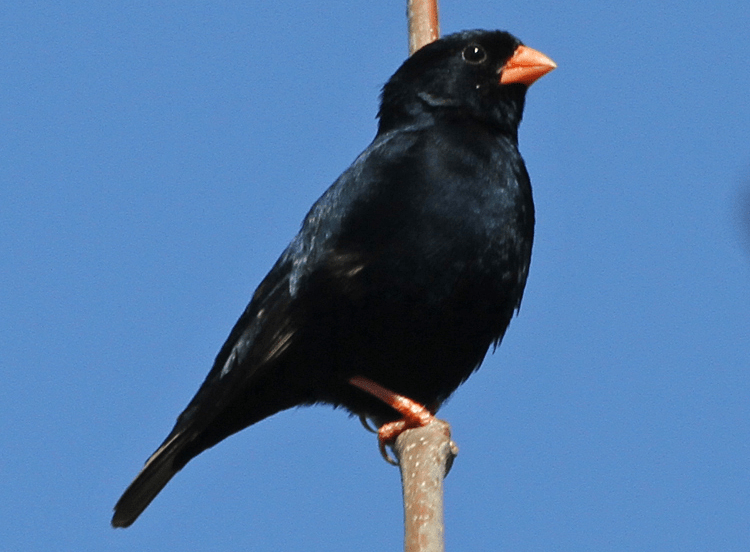 Vidua Chalybeata (Genus: vidua, Latin = widow, referring to black plumage used for mourning, or the long tail in some species which is reminiscent of a widow’s ‘train’ [long flowing robes]; species: Greek = chalybeata, meaning the blueish colour of steel [the Chalybes were an ancient nation of Asia Minor, famed for their ability to work iron])

This is one bird that I can almost guarantee seeing if I walk from the University up Groombridge Road towards Richartz House, and if it is nice and sunny: there is very often one sitting on the very topmost branch of one of the tall trees on the left-hand side, singing away merrily (or perhaps – if we could understand the ‘language’ – aggressively).

It is small, a mere 11.5 cm and 13 gms. The red bill and red legs are strikingly smart at the moment, though they will go somewhat duller in colour in the non-breeding season. In fact, the book says that these two features (the beak and legs), plus another one to be discussed below, are “diagnostic”, meaning they enable you to identify this species definitively over against some others that are otherwise very similar.

This is important since there are a couple of species of Indigobirds, and it can be difficult to tell them apart in the field: the sheen on the feathers is one distinguishing mark, but this depends a lot on which way the light is falling, and so it can be hard to be sure unless you actually have the birds in hand. In this case, the Village Indigobird, the crucial thing is the song: this kind of Indigobird mimics the song of another species, the Red-Billed Firefinch, and if you know that and hear it singing that song, you can know for sure what you are looking at.

For the Village Indigobird is (yet another) brood parasite (they’re all over the place – it seems it’s a very successful evolutionary strategy), and they specialise in deceiving the Red-billed Firefinch (which we covered in this series). Well, actually they also use the nests of the Brown Firefinch.

This may be the moment to shed some light on the “mystery” with which I closed the account of the Levaillant’s Cuckoo some weeks ago. You remember that I ended by asking how a bird such as the cuckoo, which is brought up by a completely different species, can grow up to recognize and use the calls and interpret the other behaviors of its own kind, when it was raised by birds of another species with different calls and behaviors.

Well, this is not the answer, of course, but in fact some brood parasites do actually learn the calls of their hosts, unlike the cuckoo, and continue to use them in later life – especially when they are looking for a host for their own chicks: it enables them to recognise their hosts when they hear them and perhaps also to attract and distract them while the female accomplice sneaks into the unattended nest and does her dirty business.

The Village Indigobird does learn (but how?) the song of its own species but it also does not forget and continues to mimic the song of the Firefinches.

I have put two links above, one of the call of the Village Indigobird, and the other that of the Red-billed Firefinch, so that you can compare. Listen to the Firefinch first: I think it is quite clear when the Indigobird switches ‘language’ and takes up the Firefinch’s song.

This mimcry is “diagnostic” because, although the other Indigobirds are also brood parasites, each of them mimics the species which it uses as its hosts; and the Village Indigobird is the only one with red legs, a red bill AND mimics the song of the Red-billed or the Brown Firefinch.

Hear that song, and you know what you’ve got. The book says that the Village Indigobird mimics both species of Firefinch, but being me, I am now wondering whether or not the book means that any individual Village Indigobird can mimic both the Red-billed and the Brown Firefinch. Given that each individual can only have been raised by one of them, it seems to follow that if it is able to mimic both, it must have learnt one of those songs from its fellow Village Indigobirds.

On the other hand, if the individual cannot do both but only one of the songs, this must mean that each family of Village Indigobirds – from father to son to grandson, so to speak – must specialize in their own particular type of Firefinch. Or am I wrong?