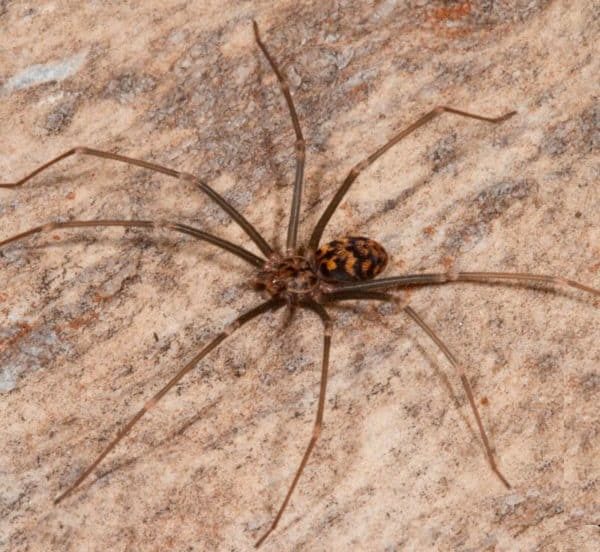 Several violin spider species occur in Southern Africa, but only Loxosceles simillima has so far been recorded throughout Zimbabwe.

Violin spiders, Loxosceles, have a fairly round cephalothorax when viewed from above which varies from a pale brown to a darker reddish brown. An important distinguishing feature is the dark brown to blackish brown violin shaped marking over the middle, hence its name. The abdomen is reddish-brown to pale brown with dark brown to blackish brown cross stripes. Body length is up to 10mm and the legs are long and slender with a span of up to 60-65mm.

Violin spiders may be confused with the harmless “Daddy-long-legs” which are usually found upside-down in a conventional web. Loxosceles on the other hand are not web-bound and spin only a few irregular strands of silk to serve as retreats, usually under rocks and logs, rubble, or in dark corners in buildings.

Violin spiders are nocturnal hunters who hide during the day in their retreats and if disturbed they remain motionless and rely on their cryptic colouration to blend in with their background. At night they leave their cover and wander off in search of prey, taking a variety of insects. They occasionally enter human dwellings and find their way into bedclothes, towels, clothing and shoes.

Violin spiders are active throughout the year with peak periods of activity in the cool dry months when mating probably takes place. Three to four egg sacs are produced following a single mating. These sacs are laid in an almost perfect hemispherical depression made in the sand and lined with silk. Once eggs are laid, the depression is sealed off with a close-spun silken lid. Sand is then kicked over the lid until it is completely buried. Each egg sac contains about 15 eggs which take roughly three months to hatch. Spiderlings reach maturity within a year and live at least three years.

Bites : Most people are bitten while sleeping, when putting on shoes or getting dressed. The bites are very superficial as violin spiders have small fangs which rarely penetrate the skin of man. The venom is cytotoxic and causes extensive tissue destruction. Initially the bite is painless, but after six to eight hours a red, painful swelling with a darker centre develops. Over the next two days the bite area becomes progressively more swollen and painful and a central black scab develops over the dead tissue. There is also a build-up of pus-like matter under this scab. After about 10 days the dead tissue separates and falls off leaving a deep ulcerating sore up to 100mm in diameter which may take months to heal.

Treatment : There is no antivenom available at present so treatment should be focused on keeping the wound as clean as possible to prevent secondary infection. Antibiotics in cream, powder or oral form, should be used regularly. Painkillers may be taken when necessary. Disfiguring scars may be left by these bites which can only be remedied by costly plastic surgery.

Precautions : Shake out all clothes and shoes before putting them on, open up and inspect bedding before going to sleep. Extra precaution should be taken whilst out camping.