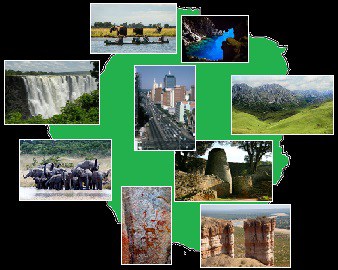 Zimbabwe offers a wealth of experiences whatever your interests and preferences. Here is a tiny taste of some of the possibilities.

In the capital itself are opportunities for experiencing the unique music and art (particularly stone sculpture) of Zimbabwe. You might be interested in exploring the city’s complicated history or its extremes of social contrast from super-wealthy suburbs that could be anywhere in the world to vibrant township life and craft markets. In early May you could catch HIFA (Harare International Festival of The Arts) a smorgasbord of local and international cultural events.

I f you have limited time and cannot travel around Zimbabwe you can still see wildlife (including some of the Big Five as well as threatened species such as rhino and pangolin) at various places outside the city such as Imire, Wild Is Life, Thetford or Lake Chivero Game Park.

A hike up giant granite batholiths reveals ancient rock paintings, spectacular views and richly varied birdlife including, at the right season, raptors on their nests. See Zimbabwean stone scultpture being created at Tengenege.  Chinhoyi’s limestone caves and deep blue water are reminiscent of the Blue Grotto on Capri.

If you have more time you could head up into the mountain ranges of Zimbabwe – Nyanga, Vumba and Chimanimani – and enjoy spectacular mountain scenery, crystal clear rivers and waterfalls, primeaval forest, trout-fishing, ancient ruins and bird watching (including some of the rarest bird species in the world).

Gonarezhou National Park borders on Mozambique and South Africa and part of the Great Limpopo Transfrontier Park and provides spectacular game viewing and scenery such as the Chilojo Cliffs  and the Save River.

The massive stone walls of the country’s namesake Great Zimbabwe were left behind by a 15th Century gold-trading   culture.

The streets of Bulawayo, the country’s second city, retain much of their historical charm in streets wide enough to turn a span (8 pairs) of oxen and a wagon.

Matobo National Park, outside Bulawayo, is another area of giant granite massifs piled with balancing rocks and home to the largest remaining groups of rhino as well as offering a range of game and bird viewing opportunities and some of the country’s most spectacular examples of rock art.

Hwange National Park is the country’s oldest and by far biggest game park and has the largest herds of elephants in Africa as well as every other sort of game, large and small, and over 400 species of bird.

ALONG THE ZAMBEZI RIVER

Victoria Falls is one of the Seven Natural Wonders of the World and apart from visiting the Falls themselves or flying over them in a plane or helicopter there are a wide range of activities on offer – bungie jumping, visiting a crocodile farm, white water rafting, an evening cruise on the river and, of course,  game viewing.

Further along the Zambezi there is the Matusadona National Parks before the river is dammed and forms the 280 mile long Lake Kariba home to houseboat trips, sailing and game viewing. Fishing here includes fishing for the famously fierce tiger fish.  Below the engineering feat of the dam wall the river continues through National Parks such as Mana Pools offering spectacular wilderness experiences.