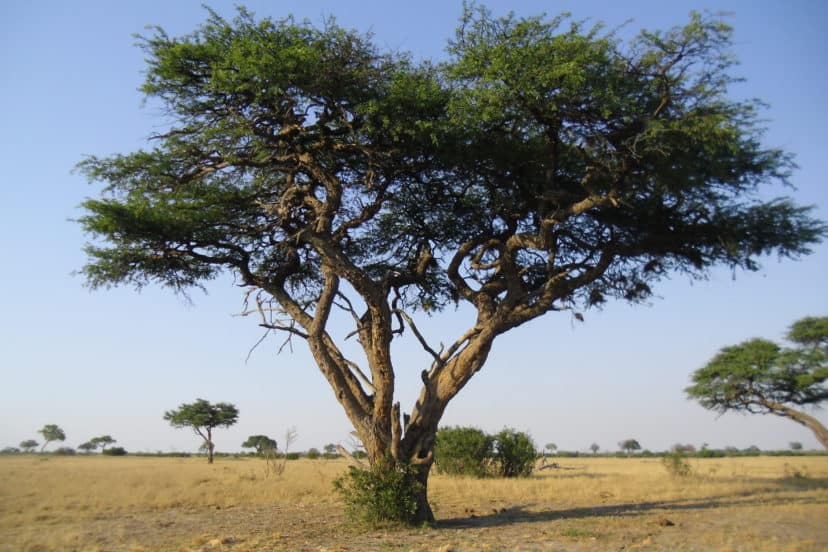 If you describe characteristic African scenery you will probably mention thorny flat-topped trees. These have been called acacias for many years but their name has been changed for reasons explained below.

There are three main types of woodland in Zimbabwe:

Up until about 10 years ago this is what we would have said about Acacia trees and woodlands.

There are scientists whose life’s work is devoted to the proper scientific naming of every living species on the planet (i.e. to taxonomy). It is important to them to be very sure that groups of species are distinguished from each other or put into groups together on the basis of chemistry and details of appearance and function.

In 2003 a group of botanists from Australia suggested that the name “acacia” was being used for many unrelated species all round the world and that it needed to be used in a much more exact way by the scientific community. This produced a great deal of serious argument and putting forward of alternative views but eventually a decision was reached at the 17th International Botanical Congress held in Melbourne, Australia, in 2011. Since then the term “acacia” refers exclusively to those species native to Australia (about 900 of them). (This is a bit strange because the word “acacia” derives from ancient Greek and specifically refers to thorns – and none of the Australian acacias are thorny.)

The African species that were previously called “acacia” are now grouped into two distinct genera, Vachellia and Senegalia, which are clearly separated based on a number of differences. The two most obvious differences are found in their thorns and their flowers.

So now we have two genera instead of the one. (N.B. “Genera” is the plural of “genus” – Acacia, Vachellia and Senegalia are genus names. Names like nilotica, nigrescens and karroo are species names.The species names did not change.)

I started this blog by saying that there are three main types of woodland in Zimbabwe:

So what do we call Acacia woodland now? I would have thought that we would have to make up a new name for this type of woodland, like “Thorny woodland” or “Vachellia/Senegalia woodland” (which would not be easy to say in a hurry). But apparently Kew Gardens (the most famous center for information and opinions about botanical matters in the world) is still referring to “Acacia woodlands” though the species within these woodlands are no longer called Acacia.

Now that we have understood the name change let us look at some past paper questions about acacias. Up until September 2013 the people setting the examination would expect to use the term “acacia” to refer to all the thorny bush in Zimbabwe.

The interesting bit for us now is those identical questions in 2016 and 2017. “Name any two species of trees that can be found within the acacia type of woodland.”

I presume they are looking for an answer like Vachellia karroo and Senegalia nigrescens – to check that you are not going to say Acacia karroo and Acacia nigrescens. But I hope you could not be marked wrong if you said Balanitis aegyptiaca (simple-thorned torchwood) and several species of Acalypha (false nettle) or Terminalia and Combretum (bushwillow) because these species grow in “acacia-type” woodland though they are not and never were acacia-type trees.

[1] “Syn.” Is short for “synonym” which means “another name for”. In botanical writing it means “a synonym of the correct scientific name”, but which name is correct depends on the taxonomic opinion of the author. In this case it would mean that the writer thinks Acacia albidia is the right name but acknowledges that some other botanists call the tree Faidherbia albida