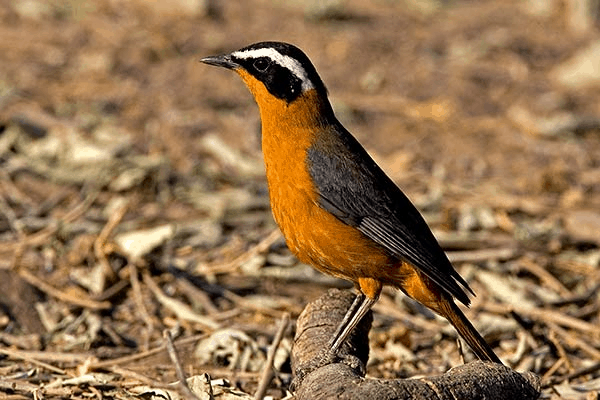 Cossypha heuglini (Genus: Cossypha = Greek name for the European Blackbird, a singing bird; Species: heuglini = after Theodor von Heuglin (1824-1876), an ornithologist who made several journeys to Africa between 1850 and 1875). (I cannot find a Shona name for this bird in my usual sources.)

The White-Browed Robin-Chat is a shy but very noticeable bird in our gardens.  They are, as you can see, very brightly coloured and distinctive, both because of the lovely orange underparts and the startlingly white eyebrow which is what is often easiest to spot when they are hiding in the lower and darker parts of shrubbery.  It almost glows.

They are quite common in these parts: more or less one in every garden.  They like deep heavy shrubbery on the edge of gardens and lurk there to make forays, especially in the morning and evening (and especially if there is a water sprinkler operating) out onto the open lawns in search of ants, beetles, moths, caterpillars and termites.

They are not robins at all, of course, but some of their behaviour and perhaps the brightly coloured breast reminded the Europeans who encountered them of the (much smaller) European robin: until recently they were known as “Heuglin’s Robins”.

Why did Europeans like to give African birds names that reminded them of their own birds at home?  Well, I suppose that we all do that kind of thing when we come across something new: we call it by the name of what strikes us as similar.  Deeper than that, perhaps, it could have been one way to make a foreign landscape feel more like home; and a way to establish and demonstrate a kind of knowledge-mastery over this wildness – for if you are the one that gives a thing its name and place it in its ‘proper place’ in the ‘scientific scheme of things’, then it feels at least as if you almost own it.  Even (or especially) if you don’t.

It is the White-browed Robin Chat’s beautiful song that is so noticeable.  It is one of the prettiest – if not the prettiest – bird songs around here: beautiful liquid notes in a variety of melodies, repeating refrains with increasing volume and tempo, especially in the cool of the early morning or evening, in that crepuscular moment between day and night.  They usually have the stage to themselves at that time and are one of the last of the day-time birds to be heard.  Do listen to the recordings of the songs to hear some of the variety of their melodies.  One has to learn to recognise the characteristic timbre, if that is the right word, rather than the melody of the song, as they perform a great variety and have different repertoires in different regions.

With this bird, you really can speak of ‘melodies’ or tunes: they are not only singers but composers.  Some birds have a very limited range of calls, but others such as this one have a wide variety and even seem to improvise: this very morning I heard a Kurrichane Thrush (still to come in this series) singing a variation of its more usual melody that I have not heard before.  It is thought that, in at least some species, having a large variety of songs helps a male (it is often but not always the males that are the main singers) defend a large territory and attract mates: a good and versatile singing voice seems to be taken by females as a sign of good breeding and so of a desirable mate.

Some pairs of birds, male and female, sing together: duets that answer and respond to each other.  One of these latter that we can often hear is the Black-collared Barbet (also still to come in the series).  Birds communicate by sound using a variety of instruments: their lungs and beaks are most common, obviously, but some snap their beaks (or ‘bills’) together, others make a clapping noise with their wings, some can even produce a drumming noise by fanning their tail feathers in flight.  Woodpeckers communicate by drumming their beaks on a tree in a staccato rhythm; some birds even pick up a stick to bang against a branch.

Other Robin-Chats – especially the Red-Capped Robin-Chat (f.k.a. the Natal Robin) – are also very good mimics of other birds, which can be confusing for the birdwatcher/listener.  The White-Browed does mimic a little, but only (apparently) the alarm calls of other birds. Why do some birds mimic the calls made by others?  What’s in it for them – apart from the pleasure of confusing birdwatcher/listeners?  (Answers, of a sort, next week.)