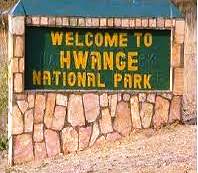 Hwange National Park is the country’s oldest National Park (set up in the 1920s). It is in the north-western corner of Zimbabwe and the largest protected wildlife reserve in Zimbabwe, covering an area of 14,600 square kilometers (1.4 million hectares) of sandy soils, vast savannah grasslands, bands of acacia woodland, mopane woodland and teak forests and rocky terrain to the north. The Park lies on the fringes of Botswana in a transitional zone between the dry, arid Kalahari Desert and the lush Highveld of Zimbabwe.

Position and Importance of the National Park

In its natural state this area was waterless in the winter and only sustained pans formed from rainwater for a time in the summer. Now there are a some 60 permanent pans maintained by water pumped from below ground by solar-driven apparatus.

Hwange National Park acts as a wildlife corridor for animals moving between the Park and the neighbouring Chobe National Park and Moremi Game Reserve in Botswana and northwards into Zambia.

For this reason it is a vital part of the Kavango-Zambezi Transfrontier Conservation Area (KAZA) which occupies the Kavango and Zambezi River basins where Angola, Botswana, Namibia, Zambia and Zimbabwe converge and reaches into all five of these countries. KAZA  is one of the largest protected wilderness areas in the world, larger than Germany and Australia, and twice as large as the United Kingdom. Jewels in the KAZA crown are the Okavango Delta, Chobe National Park, Victoria Falls and, as we have said, Hwange National Park.

Hwange National Park is home to over 100 mammal species. These include the popular Big Five: elephant, buffalo, lion, leopard and rhino (though the rhino are seldom seen now) and the Small Five: elephant shrew, buffalo weaver, ant lion, leopard tortoise and rhino beetle. One of its most impressive attractions is its large population of elephant. At last count, Hwange had more than 40,000 elephants.

Hwange is also renowned for having one of the healthiest populations of the highly endangered African wild dog, (now called the painted wolf). There are fewer than 7,000 painted wolves left in Africa and only 700 in the whole of Zimbabwe, making them one of the most endangered species in the wild.

One of the subsidiary attractions of a visit to Hwange is an opportunity to visit the Painted Dog Project/Interpretative Centre which  offers a fascinating insight into all aspects of the wild dog’s habits and unique position in the environment (as well as into the threats they are experiencing).

The conservation facility aims to address the issue through the combined efforts of taking direct action through the protection and rehabilitation of injured or orphaned Wild Dogs, while providing long-term education and development projects to the communities in the area. The centre also works to translocate entire packs of Wild Dogs from problem areas to regions where they can thrive.

Vast grassy plains and the broken woodland around them attract numerous grazers such as zebra and wildebeest and a large range of antelope including impala, kudu, eland, steinbuck, waterbuck, sable and roan. The grazers in their turn attract the predators like the lions, leopards and wild dogs mentioned above along with cheetah and hunter/scavengers like hyenas. Giraffe browse the acacia. Hippo wallow in the pans and crocodiles sun themselves on the banks.

A wealth of fascinating smaller mammals are found in Hwange from the minute Pygmy Sand Mouse through springhares, bat-eared foxes, squirrels and assorted species of mongoose to the all-pervasive populations of vervet monkeys and baboons to the smaller predators like honey badgers, civets, jackals. Warthogs root in vlei areas. If you are very lucky you might see a very shy pangolin or aardvark.

Hwange is also a bird watcher’s paradise, offering over 400 bird species. These numbers swell in the summer months between November and April when many migratory species make their way south from Europe to escape the cold northern hemisphere winters as well as from other parts of Africa as well as Europe and Asia. Summer migrants include the flamboyant southern carmine bee-eater.

The National Park is best known for its huge variety of raptors, with about 50 recorded species.  Raptors include the short-tailed eagle (which used to be called the bateleur), Dickinson’s kestrel, martial eagle and Verreaux’s eagle-owl.

There are significant numbers of grassland birds. Some of the more conspicuous species are the kori bustard, southern ground hornbill and secretary bird which are some of the more conspicuous species. Other birds to watch out for are the saddle-billed stork, crowned crane, Arnot’s chat,  three-banded courser, Bradfield’s hornbill. Various species of vulture cruise the skies looking for predator kills. The pans attract numerous waterbirds. Tickbirds and egrets hang about the grazers.

A rich array of reptiles and amphibians occupy numerous niches in Hwange, as predators and prey. The most obvious representatives are the crocodiles, doing old log impressions on the banks of most pans. In the warm summer months a wide range of snakes are about, though you will seldom be lucky enough to see one as they are generally as unenthusiastic about engaging with humans as humans are about engaging with snakes. Lizards of various sizes and shapes bake themselves in sunny spots. Frogs and toads abound. Tortoises, both leopard and hinged, hibernate in the winter but are seen bustling about in the summer.

And do not let us forget the vital teeming invertebrate population, insects like dung beetles, tok-tok beetles and ant lion larvae, spiders and scorpions and at certain seasons thousands of butterflies. Termites create spectacular sculptured mounds.

Why visit Hwange in the Rainy Season?

Visitors to Zimbabwe’s wildlife areas are generally advised to plan their trip for late winter/early summer when the vegetation is thin, grass is almost non-existent, many trees are leafless and one can see deep into the bush. At the same time water is scarce and animals are forced to congregate around the few sources of water available. Under these conditions one can expect to see a great deal of game.

On the other hand the game you see is stressed, often starving and weakened by the deprivations of the winter from which they have just emerged. (Look at Dick Pitman’s article about late-winter Mana.)

If you visit areas like Hwange in the rainy season you might miss seeing quite so much game because you drive past failing to see it as it shelters in the thick bush or because it has dispersed to water sources far from the beaten track.

But there are definite compensations:

The lush vegetation that is beautiful in itself. New leaves, flowers, pods and grasses all make their own sort of spectacular display

Seasonal pans are full of waterfowl and their ducklings.

Dung beetles are dotting the countryside and rolling away their balls of dung (if they are not eaten first by one of their many predators);

Mammal babies of all sorts taking their first trips into the outside world.

And you have all these treasures almost entirely to yourselves because the other tourists have been persuaded that this is not a good time to visit Hwange!

I personally never pass up an opportunity to spend time at Hwange and at every season find aspects that I relish. For example, the teak trees putting out their new colourful leaves, then settling into their lush summer greenery, flowering and putting out pods, filling the bush with their spectacular autumn leaves and finally showing themselves in their winter bareness – before the whole process starts again.