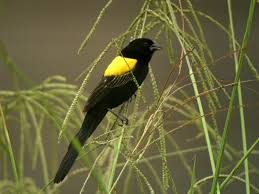 Zimbabwe seems to be the most southern country in Africa where this bird can be seen, at least according to the distribution map I looked at, but they are found in marshy grasslands in Malawi, Mozambique, Angola, Tanzania, Kenya, South Sudan, Congo, Cameroun, Nigeria, Gabon, Ghana, and Burkino Faso and as far north as Ethiopia and as far west as Guinea.

These birds, like many others, are ‘polygynous’ (Greek: poly = many, gyna = woman).  The males, brightly coloured, invest as little time and energy as possible in parental care and usually leave to the female the business of incubating the eggs, by sitting on them to keep them warm until they hatch, and very arduous work of protecting, feeding and raising the chicks.  This, as many of us males have noticed, gives us more time to have fun – which, for birds at least, usually means attracting and mating with other females.

Actually, this is unfair to birds: the business of reproducing is a very serious – and no doubt physically exhausting – one indeed.  Nothing else is more important to them.  Everything depends on producing strong and healthy offspring.  Not all of the offspring will survive, and not all of those who do survive will go on to reproduce: but the more there are, the more competition for females to choose from, and the better their chances are of finding further strong males to continue the line.  (Actually, having written that sentence, I am suddenly wondering if it’s true: is it true that ‘the more, the better’ when it comes to offspring – from an evolutionary perspective, I mean?  The only way of answering that, I take it ,would be through empirical studies in the field…  It must, in the end, be a question of balance.)  It is interesting, though, that the survival of the species depends quite a lot on the choices that females make.  Think about that.

There are some species of birds which are the opposite of polygynous, i.e. ‘polyandrous’ (Greek, poly = many, andros = man), in which a single female pairs with many males.  Such polyandrous species are, however, not very numerous – fewer than 1% of all species, in fact.  After the female has laid her eggs she abandons them to the care of the male and goes off in search of another male to fertilize her next clutch of eggs.  In polyandrous birds, the female is usually bigger and may be more brightly coloured than the male who is duller (in colour, I mean, of course!) – presumably because if you have to sit still for hours on a nest, it is safer for you and your eggs if you are less ostentatiously coloured.  In Southern Africa, for example, the African Jacana (which you can see paddling around the edges of ponds and rivers) is polyandrous and the female larger than the male.

Interestingly, there are even some male birds who are rapists; or at least rape occurs at times amongst some species, especially in certain kinds of duck.  So even rape is not an exclusively human act.  In some species of duck, males gang together to intimidate and chase away the ‘territorial male’ (the alpha duck, one might say, the one that controls the territory), allowing them to ‘gang rape’ his female in the water, sometimes leaving her half-drowned.