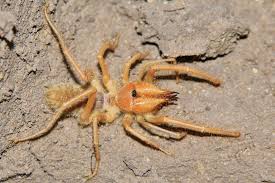 SUNSPIDERS (Solifugae) These arachnids, commonly known in Zimbabwe as Gerrymuglins, Gerrymanders, Camel spiders, Rain spiders, Kalahari Ferraris, Romans and Hunting spiders, are not true spiders as they do not produce silk, but form an order of their own. They are aggressive predators, with large chelicerae (jaws) and quick movements. They occur in hot, dry regions and there are over 240 species in southern Africa.

The diurnal sunspiders are slender with dark markings on the body and legs; nocturnal species are yellow to brown and can reach up to 75mm long. Often seen in the rainy season, sunspiders are harmless in that they have no poison glands. The chelicerae are well armed with teeth and the males have either a fixed or moveable flagellae (horns) on the chelicerae. The varying shapes of the flagellae are important diagnostic characters in identification. The long, slender pedipalps act as feelers and end, not in a claw, but in a peculiar suctorial organ.  They are used to transfer food to the jaws and while drinking the tips are brought together and used like a pair of hands to lift the liquid to the month. Solifugae can also climb up glass by means of their pedipalps. They have two large eyes and the entire body surface is covered in sensory hairs, which may be up to 50mm long; hence, some sunspiders look like balls of fluff.

The legs of the Solifugae are quite characteristic. The first pair are long and rather feeble. They are not used for walking but are carried outstretched and are used as additional tactile organs. The remaining three pairs of legs are used in locomotion and those of the fourth and strongest pair bear the malleoli (pairs of racket-shaped tactile organs). The last few segments of the locomotion legs have stiff hairs and spines which allow sunspiders to run rapidly over loose sand. Most species are capable of running fast over short distances (up to 53cm per second)

Sunspiders are solitary and live under rocks and logs in scraped out shallow retreats. They construct these shelters by loosening the soil with their jaws and then pushing it backwards with their head area and feet. When hunting, they explore an area by running and changing direction rapidly, relying on their sense of touch to locate food (insects and large prey such as baboon spiders, scorpions, small birds, snakes and lizards). The sunspider crushes its prey in its chelicerae and the scissor-like action of the jaws cuts up the prey before the juices are sucked up. Solifugae feed with an extraordinary voracity and will continue feeding until their abdomens are so distended that they can scarcely move.

Courtship and mating have rarely been observed. It appears that once the male finds a female he turns her over and opens her genital orifice with his jaws. He then emits a globule of semen on the ground, picks it up in his jaws and deposits it into the females’ genital opening. This only takes a few minutes and then the male leaps away to avoid being eaten by the female. Eggs are deposited, 50-200, into a burrow in the ground at the end of the rains and the female guards the egg case until the young hatch. After the young moult they leave the care of their mother and disperse. They go through nine instars before they mature and can live for 1-2 years depending on the species.

The Button or Widow Spiders of Zimbabwe

Zimbabwe has a rich spider fauna. With the exception of a few species, all spiders have…