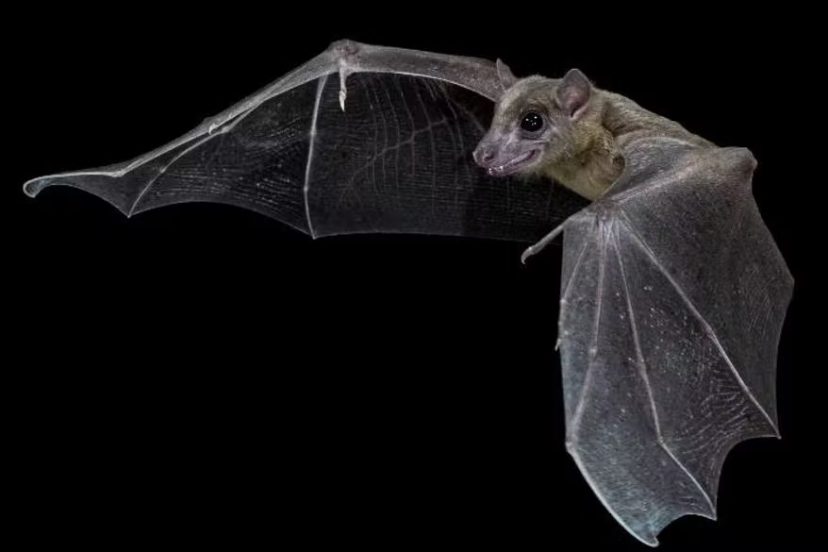 Bats belong to Order Chiroptera (meaning “hand wing” from “chiro” = hand + “ptera” = wing). They make up 20% of the mammals on the planet (or to put it another way one in five mammals is a bat)[1] and there are over 1,300 species of bat, differing widely in size, appearance and diet. Bats inhabit every continent except Antarctica.

• They can “see” very well with both their eyes and their ears. As far as their eyes are concerned the expression “blind as a bat” seems to arise from their tiny eyes and their creeping, fumbling “blindness” if they find themselves on the ground. They augment ordinary vision with “echolocation” producing a stream of high-frequency sounds (at a rate of about 160-190 chirps per second [2]) that bounce back to their sensitive ears and give them super-accurate information about the position of objects around them.

Their apparently erratic flight is determined by their ability to take rapid evasive action if something looms in front of them as well as swopping to catch insects on the wing.

Bats have millennia of association with humans and surround us in huge numbers and great variety – but they have been traditionally hated by humans through the ages. As many bat species are being brought close to extinction it is vital to distinguish between the myths and realities concerning bats.

Let us start with the beliefs about bat physiology:

Then there are the metaphysical beliefs about the essential nature and spiritual associations of bats. They occupy an unsettling space between categories – apparently half-bird and half-mouse. They live in inhospitable places like caves and have alarmingly silent but highly erratic flight.

But above all bats are traditionally associated with night-time and darkness and by extension with nefarious deeds carried out under cover of darkness. This leads to an association with witchcraft and black magic, evil, human vampires and death. (The devil is pictured with bat-like wings while angels have bird-like wings.) All of these associations are human constructs that have nothing to do with the creatures flying around catching insects or sipping nectar.

Bats make a mess in buildings. When bats take up residence in buildings, for example, in ceilings or porches or church towers, they create a mess of dung and urine that looks unsightly and smells unpleasant. (Though unlike rats and mice they do not bring in nesting materials or chew wires.) They are also increasingly likely to move into human habitations as they lose access to their natural roosting places through habitat degradation. [8]

Bats spread disease. They are subject to many of the same viruses that affect humans, and that can spread from bat to human populations. (The same is true of rats and mice and some birds.) The viruses include rabies, Ebola and Corona.

As far as rabies is concerned it is estimated that one in 1000 bats carries rabies – and quickly becomes paralysed and dies. It would only spread rabies to humans if it was handled.

Bats have been implicated in the spread of Ebola in Africa and Corona in China though the evidence is disputed. What is clear, however, is that the possibility of diseases spreading from bats to humans is increasing because of wildlife trade, environmental changes, habitat loss and the eating of bats as bushmeat.[9]

Bats have a vital role in maintaining biodiversity and so the health of the planet. Their exact role is determined by their diet.

Nectar-eating bats are pollinators of some 700 species of plant[10], many of which are important food crops, as well as of some 80 species of plant that yield medicines. They pollinate night-flowering plants with large, pale-coloured flowers like mango, guava, banana, some figs, avocado, dates as well as baobab and sausage-fruit trees and many species of cactus.

Insect-eating bats can eat 600 to 1000 insects in an hour and tons of insects in a year. A nursing mother bat eats the most – sometimes catching more than 4,000 insects in a night.[11] A disease called white-nose fungus is devastating bat populations in North America[12]. It is estimated that the resultant boom in the insect population causes crop damage calculated at between 3.7 billion and 53 billion US dollars in a year [13]. The disaster has also caused a massive rise in the use of pesticides in an attempt to control the insects as well as failures in forest ecosystems, for reasons explained below.

Fruit-eating bats are responsible for seed-dispersal in their droppings, moving seeds away from their parent plants and ensuring the health and renewal of forest areas. It is calculated that in one square meter of rainforest floor there will be 12 to 80 plants that are a result of dispersal in bat droppings. They are also responsible for helping in the regeneration of areas of degraded forest.

Speaking of droppings, bat guano collected from caves where bats roost, is extremely rich in soil nutrients and vital for agriculture in areas where domestic livestock are not available to supply manure.[14]

Bats are playing an important role in medical research. Vampire bat saliva with its anti-coagulant characteristic has been incorporated in medicine for thinning the blood of stroke victims. Scientists are studying viruses in bats with a view to understanding their operation in humans.

They are also interested in the bat’s apparent immunity to DNA damage and to malaria, both of which might be put to use for the benefit of humans. Bats’ echolocation system is being studied to see if it can be adapted to the creation of navigational aids for the blind.[15]

We have spoken above about the extent to which humans hate and fear bats. The reality is that bats have great cause to hate and fear humans.  Many species are in danger of extinction as a result of factors such as [16]:

Any species that becomes extinct is a loss of biodiversity and therefore a threat to the health of the planet. But the loss of bat species would also contribute to a direct loss to human diet and health. We need to make every possible effort to support organisations working to protect bat populations and to avoid any actions that pose a threat to these remarkable and crucial creatures.

Pangolins or scaly anteaters are estimated to have lived on earth for nearly 80 million years.…